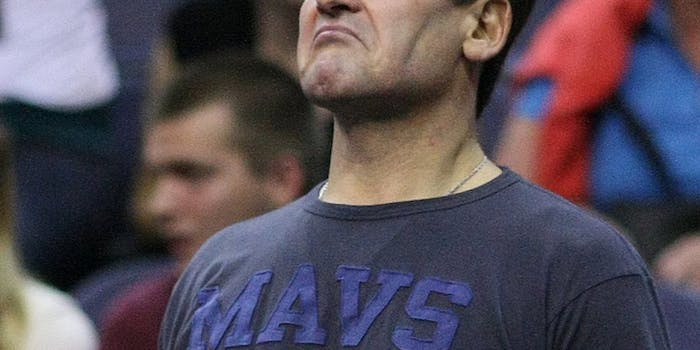 The outspoken billionaire entrepreneur and owner of the Dallas Mavericks announced that he’s so fed up with being nickled and dimed by Facebook that he’s going to dump the social network and look at other social media platforms to promote his myriad companies.

Cuban first publicly complained about the Facebook feature in an Oct. 26 tweet. “FB is blowing it ? This is the first step.. The Mavs are considering moving to Tumblr or to new Myspace as primary site,” he threatened.

The source of his frustration was a screenshot, posted below, that showed Facebook asking for $3,000 to help spread a Mavericks related post to up to 1.885 million people, a little over half of the team’s total Facebook audience.

On Tuesday, Cuban reiterated his intention to abandon Facebook for greener social media pastures in an exclusive email exchange with ReadWrite.

“We are moving far more aggressively into Twitter and reducing any and all emphasis on Facebook,” he said. “We won’t abandon Facebook, we will still use it, but our priority is to add followers that our brands can reach on non-Facebook platforms first.

The Mavericks owner also argued that it wasn’t worth a brand’s time to grow and nurture a following on Facebook, and that companies who did so were betting on the wrong horse.

“Why would we invest in extending our Facebook audience size if we have to pay to reach them? That’s crazy… Brands have invested in getting consumers to like their Facebook page with the presumption that every like is created equal, that the brand can reach the user easily. That is not the case.”

He also intimated that Facebook was doing it all wrong. Instead of charging brands and companies every time they wanted to promote a single post, he argues that the social network should just charge a fee instead.

“The right price is to charge an upfront fee for brands. In the current system there is complete uncertainty on the cost. And even worse … you have to deal with the pricing for each posting, which is a time waster. I’m just suggesting that a single upfront fee or a monthly fee where there is certainty of cost would allow brands to focus on bringing in consumers to like the brands knowing that they can always reach everyone that likes them.”

To date Cuban is the biggest name to come out against Facebook promoted posts. In June, former Star Trek actor and Facebook celebrity George Takei took to the very same social network to complain about how his posts—comedic gems—were no longer reaching the same portion of his audience as they once had.

For its part, Facebook has been steadfast in its stance that it has done nothing wrong, and that the adjustment to Pagerank—the algorithm used to determine what content makes it to people’s feed—was to create a better user experience.

“This change was made to discourage content that wasn’t engaging (and was being reported as spam by users) because we want to ensure people aren’t seeing what they might consider spam in their feeds,” Gwendolyn Belomy, a spokesperson for the company, told the Daily Dot in late October via email.