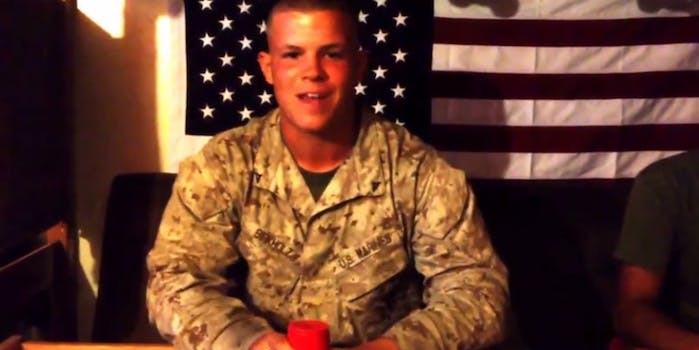 U.S. Marine asks out Anna Kendrick with his own ‘Cups’ song

Does Lance Cpl. Corey Birkholz have a chance with one of Hollywood's hottest actresses?

Anna Kendrick’s “Cups,” made famous by her performance in Pitch Perfect, has become one of the most-covered songs on YouTube. Friday morning, yet another cover version arrived from Okinawa, Japan, but this one was different from the others.

Lance Cpl. Corey Birkholz of the United State Marine Corps posted his version of the cup-and-vocal hit, including lyrics he wrote himself, to ask Kendrick to the Marine Corps ball this November. He stuttered over a word or two, and his singing wasn’t quite as good as Kendrick’s, but he wasn’t doing this to entertain YouTube.

“I thought it would be worth a shot by making this video,” Birkholz told the Daily Dot, adding that the video was not scripted.

Birkholz’s proposal is the latest in the trend of asking out celebrities using clever YouTube videos. So far, the video has received a little more than 2,000 views and a handful of comments confirming he’s a good guy, but he still might have a long way to go.

Sometimes no matter how many views you get, you can still get turned down, like when this kid asked Kate Upton to come to his prom.

“If you say yes, hit me up,” Birkholz said in the video. “If you’re just thinking about it, hit me up.”