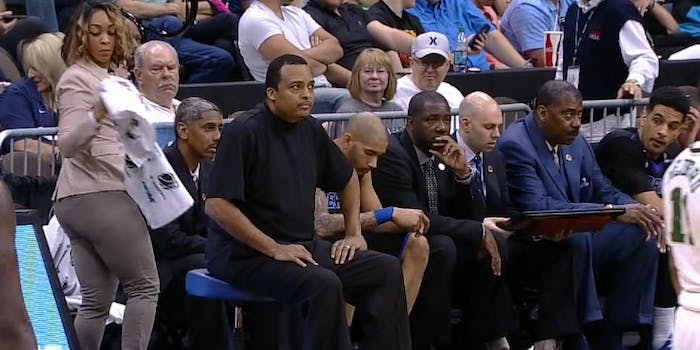 Baylor blows it, but only after Georgia State delivers a classic NCAA moment.

About that whole “madness” thing.

Following a breakneck afternoon wherein Cinderellas refused to go home at midnight, a series of high-profile schools and seeds are done with their NCAA Tournament bids earlier than projected. That’d be No. 3-seed Iowa State (which fell to the University of Alabama-Birmingham); and more dramatically No. 3-seed Baylor, a school undone by pesky, 14-seeded Georgia State and a game-winning, long-range 3-pointer so good that coach Ron Hunter fell out of his chair.

Gotta be one of the best moments in tourney history: https://t.co/WFyiTInceT

Hunter’s son, R.J., not only drilled the bucket but was also responsible for 12 late points during a 13-0 Georgia State run that carried it past Baylor. Coach Hunter tore his Achilles last weekend when his Panthers won the Sun Belt Conference to get in—hence the chair.

But whatever, pain is temporary.

In a year when an overwhelming majority of brackets defaulted to the dominant Kentucky Wildcats, winning an office pool will come down not to the end, but to who had what early on. In the immortal words of Kramer, “I’m out.”