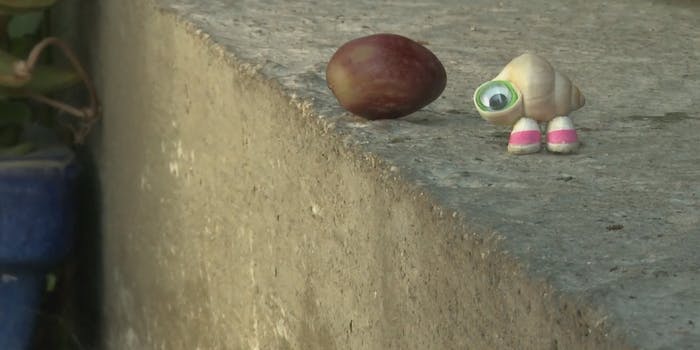 Enjoy the long-awaited return of Marcel the Shell

Everyone's favorite sea creature is back with more adorable stories.

It’s been nearly three long, cold years since we got some squeaky wisdom from Marcel the Shell, but he’s finally back with “Marcel the shell with shoes on, three.”

Marcel is the brainchild of actress and comedian Jenny Slate, who voices the precocious shell, and her husband, filmmaker Dean Fleischer-Camp. Their beloved character first appeared on the YouTube scene back in 2010, andthe original video has racked up over 23 million views to date. The sequel debuted one year later and has just over 8 million views.

In his latest adventure, we find Marcel and the documentarian who interviews him in a garden. He reveals deep, dark secrets, tells us the truth about shrimp, survives his first storm, shares his favorite saying, and even sings us a song.

And if that didn’t fully satiate your Marcel thirst, here’s Jenny Slate singing a song as Marcel on the Late Show with David Letterman last week.

Marcel has already spawned one book for Slate and Fleischer-Camp, and a second, “ Marcel the Shell: The Most Surprised I’ve Ever Been,” comes out tomorrow.

Welcome back, Marcel. Next time don’t take so long!