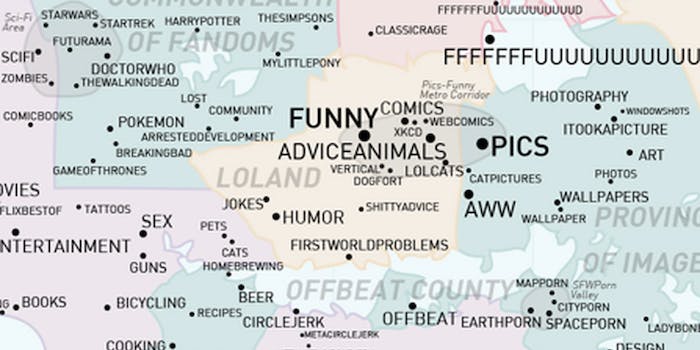 Where do you live on Reddit? Is it the bustling metropolis of AdviceAnimals? The archipelago of Socialism? The scenic lakeside town of First World Problems?

Those are all possibilities on the Map of Redditland, which assigns the social news site’s communities to physical land masses. It’s the work of user LaurelQuade, a Brazilian college student and graphic design major. The redditor told the Daily Dot that the sprawling map was the result of some extra time on winter break.

“I did this map because I saw that the subreddits have a huge importance and gather different demographics and connect to other similar subreddits, just like cities in a country,” he wrote. “Plus I love Reddit, statistics, design and maps, so, in hindsight, it just seemed the right thing to be done.”

The 20-year-old student, who declined to give us his real name because he’s “not an extrovert,” said he built the map by inputting redditlist.com data into Excel. After generating a formula to create vector graphics, he drew the continent in Photoshop and finished up in Illustrator.

“I like how some people found new subreddits looking at it,” he told commenters. “That’s the purpose of making this map: to make people find new places.”

The redditor submitted his map yesterday to r/pics and r/MapPorn, where it quickly became a hot topic of each subreddit. But while most redditors were happy to admire LaurelQuade’s work and even build a clickable map based on the image, others found parts of the map problematic.

“I accidentally put r/fffffffuuuuuuuuuuuu in the middle of a lake, and somebody pointed that out, thinking it was a little joke of mine, also considering the nature of the subreddit,” he said.

But some wanted to know: Why was the LBGT community exiled to an island? LaurelQuade, whose post-college aspiration is to work on branding and visual identity, took it in stride.

One thing I learned from this map is that anything can be seen as symbolism, even though that was not the author’s intention. I did make some things on purpose, like the positions of the regions of Politics, Music and NSFW, but people also made a lot of conjectures on things I didn’t even think about.

If, like us, you were blown away by the map and looking for more from this talented redditor, you’ll just have to wait.

“I’ve yet to make a portfolio for the moment when I will begin my design career,” he said, adding that this is “the only interesting thing I’ve ever done.” 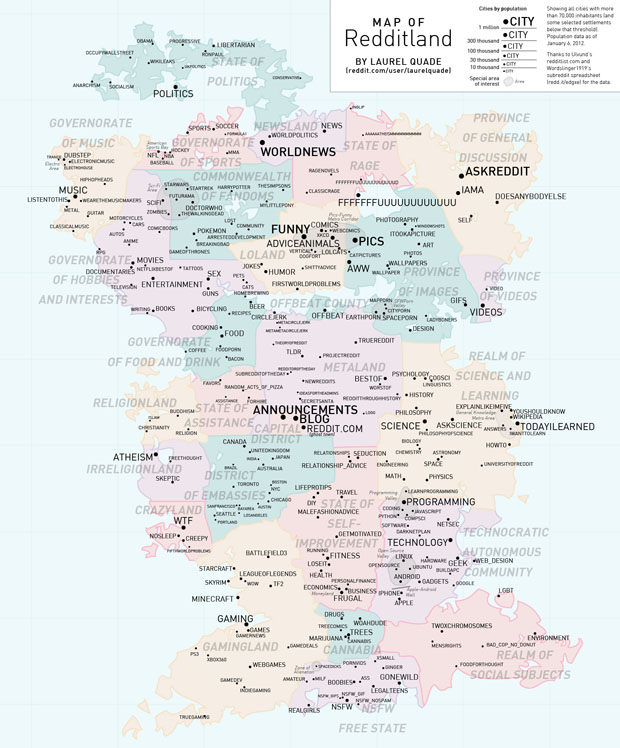