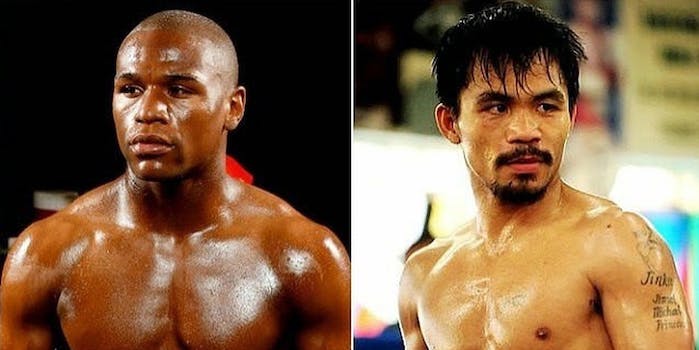 HBO and Showtime doing all they can to prevent you from watching the Mayweather-Pacquiao fight for free.

If you’re not willing to shell out thousands of dollars to watch Manny Pacquiao fight Floyd Mayweather in person at the MGM Grand in Las Vegas on Saturday and you also aren’t interested in dishing out hundreds of dollars to view it on closed-circuit TV, your only option is to order it on pay-per-view where you’ll pay $99.99 for the HD version.

This is the most-expensive pay-per-view in boxing history, and for an all-time classic matchup like Mayweather-Pacquiao, the promoters who have invested so much time and money in making the event happen will try to gouge the consumers who have hungered for this fight for the past half-decade.

But because the fight will be so damn expensive to watch—the previous high for a PPV boxing event was $74.95—it’s not difficult to understand why fans will try to skirt the rules, even as those who stand to make the most money from the bout will fight those moochers who want to enjoy the fisticuffs for free.

Applications like Periscope and Meerkat could give relief if a person who has access to the fight wants to provide others with a free experience. But don’t expect it to be that easy this weekend.

Already, Periscope has caused a problem for HBO, which has partnered with rival Showtime to put together Saturday’s mega-event. When Game of Thrones made its season 5 premiere last month, many HBO-less fans watched on Periscope. HBO sent takedown notices to the Twitter-owned app, and an HBO spokeswoman told the Hollywood Reporter, “In general, we feel developers should have tools which proactively prevent mass copyright infringement from occurring on their apps and not be solely reliant upon notifications.”

As the Daily Dot’s Mike Wehner wrote at the time, “Periscope’s terms of service specifically forbid streaming copyrighted content, but the app relies on user reports in order to flag specific streams as problematic. This means that unless a significant number of upstanding Web citizens sound the alarm, a stream can remain active indefinitely.”

Yet, it sounds like HBO and Showtime will be much more vigilant this weekend.

As reported by Deadline, the two premium cable companies along with Mayweather Promotions and Top Rank—the two main promoters of the event—filed a copyright infringement complaint against a number of websites who were advertising free livestreaming of the fight. They also want a temporary restraining order, a preliminary injunction, and a permanent injunction in shutting down the sites while the fight is happening.

“Boxinghd.net and Sportship.org are promoting unauthorized free streams of our intellectual property,” HBO and Showtime said in a statement to Deadline. “As content creators and distributors, we believe that combating piracy and stopping content theft is crucial to maintain our ability to provide our customers with world-class programming like the Mayweather-Pacquaio fight.”

“Periscope will review all reported broadcasts against its content policy, which expressly prohibits the broadcast of copyright-protected material,” a Twitter spokesman told the Daily Mail. “After investigation, Periscope will take down any reported streams that are deemed too infringing. Users who are found to be repeat infringers may face account suspension or termination.”

It’s hard to blame the cable companies and the promoters for wanting to make it as difficult as possible for fans to see the fight for free, especially since Boxinghd.net was, via Forbes, advertising its services this way: “If you can’t afford to buy tickets then simply watch Mayweather vs. Pacquiao here. We will provide with nothing but the freshest and the most reliable high quality live links.”

For now, the plaintiffs have succeeded in shutting down two of the major livestreaming sites. As of Friday afternoon, neither Boxinghd.net nor Sportship.org were online, and you can bet that HBO and Showtime will be diligently checking around every corner on the Internet to shut down anybody else who might be thinking about giving away the fight.

Thus, if you don’t want to pay $100 to watch the bout, Forbes has what might be your only option. But you’ll have to pack your bags.

In the UK, for example, [the telecast is] available through Sky Box Office for just £19.99, or around $31. In Scandinavia, it’s around $60, and in Spain just $13. In Pacquiao’s home country, the Philippines, the fight will be broadcast live on both cable TV and free-to-air.

And in Mexico, TV companies Televisa and Azteca have also won the right to show the fight for free; get a good deal on a flight, therefore, and it might just be worth considering a weekend away.

The moral of the story here, then, is pretty simple. Unless you want to take a deep dive onto pirated sites that might not be shut down or you can find somebody surreptitiously showing it on Periscope, you’re probably going to have to pay a substantial sum of money to watch the fight.

Mayweather, Pacquiao, HBO, and Showtime, I imagine, thank you for your patronage.

Photo via Justin Matthew/Flickr (CC BY 2.0)