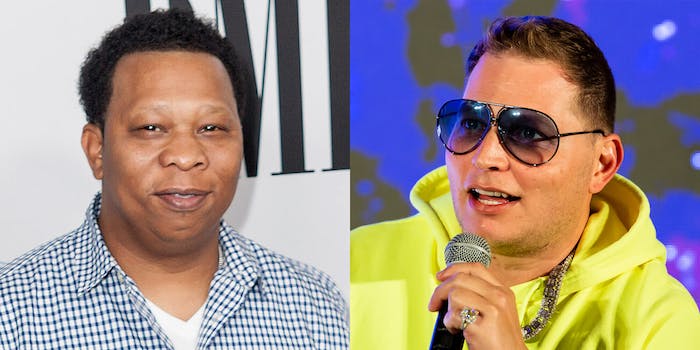 Mannie Fresh and Scott Storch beat-battled on Instagram, for the culture

In the age of coronavirus, Instagram Live beat battles have become game-changing entertainment.

On Wednesday night, two hip-hip heavyweights, producers Mannie Fresh and Scott Storch, stepped into the Instagram Live arena and went toe-to-toe with their hit tracks. It’s part of a growing movement of beat battling that’s taken hold during the quarantining and social distancing from the COVID-19 pandemic.

Storch was the consensus winner, based partly on the superior diversity of his catalog, and his showmanship. The Philadelphia-raised artist played live keys—the instruments he’s known for—during his productions.

The New Orleans-bred Mannie Fresh wasn’t a slouch and came with all of Cash Money Records’ crowd-pleasing hits, including “Bling Bling,” “Ha,” and club classic “Back That Azz Up.”

Fellow star producer Swizz Beatz, and others, even came through with unofficial scorecards—recording each of near-ubiquitous hit songs and Billboard chart-toppers.

The terms of the battle, though, aren’t explicit. Like the previous famous, now-2-year-old beat battle that Swizz Beatz (of Ruff Ryders, D.M.X., Eve fame) won over Just Blaze—who most famous for his work on Jay-Z’s 2001’s classic The Blueprint and Eminem’s 2010 album, Recovery—it becomes less a battle over chart success and more of a contest on cultural impact.

One of the interesting points made was found in closer inspection of Storch’s discography. For example, he played Jay-Z’s “The Watcher 2” and Dr. Dre’s “Still D.R.E.,” neither which he’s officially accredited for producing.

Of course, some quickly brought up one of rap music’s secrets: ghost production. In the early days, Storch, like his near-contemporary Kanye West, made his bones ghosting for big producers, including and especially Dr. Dre.

Ultimately, the Storch and Mannie Fresh matchup is likely just one in a line of future battles, as hip-hop culture keeps finding a way to shine even amid global tragedy.