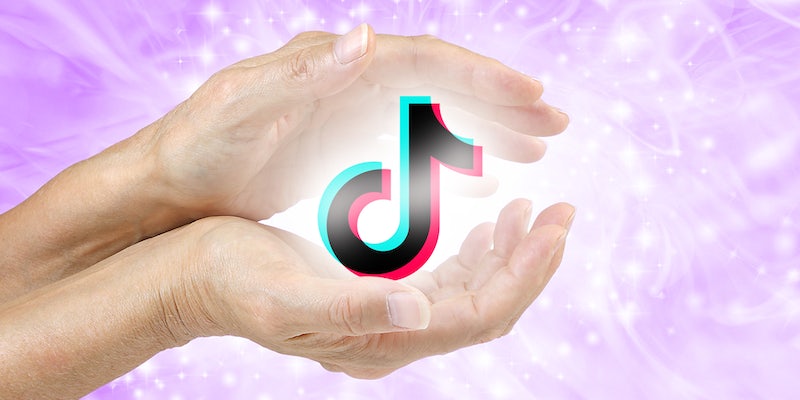 TikTok manifestation sounds promise quick and easy fortune, but WitchTokers want you to be wary of gimmicks

As viewers turn to manifestation to cope with economic uncertainty, some TikTokers are making sounds to go viral.

At first, I scrolled past TikToks using manifestation sounds only once or twice a week—an understandable algorithm push for a user who identifies as a modern witch and uses social media to learn about astrology. But now, it happens every time I scroll the app: videos using sounds that are supposedly magical, promising to change everything in my life for the better if only I interact with the video to “claim” its energy.

The sounds range from affirmations like “I don’t chase, I attract; what belongs to me will simply find me” to money-calling chants like “Ching, ching, ching, goes the money tree, and every time it ching, money comes to me” to a single Tibetan singing bowl meditation note that promises to deliver abundance in 24 to 48 hours. The promises usually relate to money, finding a romantic partner, and generally “good things” happening to the person who re-uses it.

The gimmick is blatant: by making manifestation seem as quick and easy as uploading a video on TikTok, the hopeful viewer helps the sound go viral, thus adding to the promise that this is a legitimate life hack to achieve all your dreams in less than two minutes of upload time.

Using my tiny, pretty much invisible TikTok account, during periods where my freelance work is running dry and rent is almost due, I sometimes try to claim the energy these videos promise me. I want to be like those girls who post manifestation success videos with captions like “THIS SOUND WORKS, I GOT MY DREAM JOB 40 MINUTES AFTER I CLAIMED THIS ENERGY!!” so badly. It would make my life much easier, so I use the sound in a video or comment “I claim this energy,” even though deep down, I know it’s too good to be true.

I’m certainly not alone; these videos go viral very quickly. The original video for the “I don’t chase, I attract” sound, for example, has upwards of 6 million likes and has been shared over 700,000 times. But the beliefs they carry are not exactly new ones. In tracing back what writer and artist Jesse Meadows terms “the spiritual origins of American bootstrap mentality” in their newsletter Sluggish, Meadows identifies several motivational books and multi-level marketing schemes that are ground-zero for this kind of thinking.

Citing The Secret by Rhonda Byrne and Think and Grow Rich by Napoleon Hill as origins of the trend, they point out that “[i]deas about changing your life by vibrating at a higher frequency with positive thoughts are popular in this economic downturn for the same reason they were popular […] during the Great Depression, because they feel personally empowering at a time when the masses are grappling with terrifying economic precarity.”

When we cannot control certain outcomes in our life—like the economy or our lack of employment—it is comforting to believe, even if for a second, that something we can control will be the solution to our misery. Something as easy as sharing a sound on TikTok can provide a moment of relief where we believe we are in control of our destiny.  Basically, it’s the Law of Attraction—a New Thought spiritual belief that positive or negative thoughts bring corresponding experiences into a person’s life—repackaged for the digital age and optimized for virality during difficult economic times.

WitchTokers have also noticed that these sounds have been going viral with impossible promises to their viewers. E. Angellé (@Theunfitmisfit), a WitchTok creator who shares her witchcraft practice on the social media platform, says that if viewers are not secure within themselves, they may start to believe that simple sounds on the Internet can determine their fortune or life achievements. In turn, this can lead to people feeling hopeless and lost.

“Personally, I find the manifestation sound trend is relatively predatory in nature,” Angélle told Passionfruit. “But don’t let that negate the fact that music is magical. Drums, hands, voices, and dance all make up the magic that is within using music. However the problem lies in the fact that people try to make a simple sound into something that can make or break a manifestation.”

Because manifestation sounds are so popular, WitchTokers have noticed that some creators are using the trend to go viral, rather than share witchcraft to broader audiences. Samantha Jayne, a U.K.-based spiritual coach who makes content about energies and tarot, says the competition for visibility on social media—and how the coveted viral video might translate into a sustainable business due to its large audiences—adds to this dynamic.

“People will always try to latch onto trends when they are in fear, lack of not having enough money, not creating business and with it getting harder and harder to be seen on social media, people will use any gimmick they can if they have to,” Jayne said.

Jayne uses sounds to aid manifestations in her work with clients, so it’s easy for her to tell when a sound claims to do something that doesn’t make sense with the solfeggio frequencies that are being used. Solfeggio frequencies are specific tones of sound that help promote various aspects of body and mind health, used in Western Christianity, Eastern Indian religions, Gregorian Monks and in ancient Indian Sanskrit chants. As a spiritual coach who has studied solfeggio frequencies, Jayne can tell, for example, if a sound is legitimate and whether the claim being made by the video matches the frequency. “For example 417Hz is for the removal of trauma, not creating money,” she said.

Chris Miller, a scholar who studies Paganism and how it intersects with technology and social media, cautions against dismissing TikTok witchcraft as inherently a gimmick, emphasizing that seeking virality doesn’t necessarily mean the original creator is inauthentic in their practice or solely seeking profit.

“Is promising to give the viewer whatever their hearts desire probably a slight exaggeration to boost a creator’s music? Probably,” Miller said. “But some [creators] may genuinely believe that they have discovered or created something powerful. And so if you believe you have something powerful to share with the world, then they might think that ‘clout chasing’ is done for the best of intentions. It is a means to an end.”

As a viewer and occasional user of these sounds, I continue to go back and forth on their supposed powers to fix my life. On the one hand, there is nothing wrong with having beliefs and practices that help you cope with the realities of overwork, burnout, and a possible recession. I often use affirmations and meditation to counter negative intrusive thoughts and dissociation in my daily life. On the other, the fleeting feeling of hope and control I get when I give in to these manifestation sounds sometimes leave me feeling even more lost than before.

Perhaps the problem is viewing any spiritual practice—online or offline—as a solution for financial struggles when the real problem is the exploitation of capitalism. Manifestation shouldn’t be seen as a solution for our problems—rather, as a tool for coping when things get difficult.

Nicole Froio is a Colombian-Brazilian journalist, researcher, and writer. She writes about pop culture, masculinities, work and gender, violence against women, inequality, digital cultures, and books.