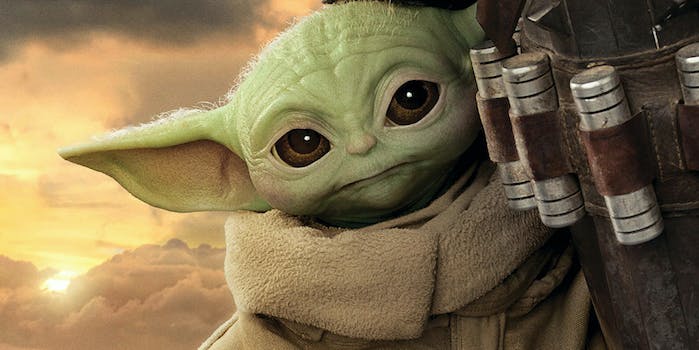 Give the people what they want.

When Disney ramped up promotion for The Mandalorian’s first season, it did so while trying to hide its biggest asset, the instantly iconic Baby Yoda. But now that the Baby Yoda is out of the bag, Disney+ can heavily feature The Mandalorian’s star in its promotions—by placing him in another bag, to pretty much everyone’s delight.

We got our first real look at The Mandalorian’s second season as Pedro Pascal’s Mandalorian and the Child, as he’s officially known (and a name that Disney has mostly failed to get people to use instead of the far more ubiquitous Baby Yoda) graced the cover of Entertainment Weekly.

The accompanying article is light on season 2 details, but it did tease plenty about the growing scope of the series with a comparison to Game of Thrones, the reaction to it (including a surprise best drama Emmy nomination), and just how the relationship between writer-creator Jon Favreau and executive producer Dave Filoni works. While we already knew that Favreau would finally direct in season 2, EW revealed that Favreau is helming the season 2 premiere and other directors include Rick Famuyiwa, Carl Weathers (who also plays Greef Karga), and Robert Rodriguez.

It hinted at interactions between Giancarlo Esposito’s Moff Gideon and both Baby Yoda and Pascal’s Din Djarin, along with the potential appearance of legacy characters like Ahsoka Tano (Rosario Dawson), Bo-Katan Kryze (Katee Sackhoff), and Temuera Morrison playing a clone or Boba Fett (or possibly both); Michael Biehn and Timothy Olyphant were also rumored to be cast. (“Some of them are true, some are not sure,” Gina Carano, who plays Cara Dune, said in response to the rumored new cast members.) And although The Mandalorian finished shooting just before COVID-19 shut down most Hollywood productions, Favreau mentioned how challenging it’s been to record the show’s score in quarantine.

What’s even more interesting—and much easier to get excited about on a surface level—is the emergence of new Baby Yoda photos. The EW covers certainly aren’t the first time that Baby Yoda has graced the cover of a magazine; an illustrated version of him appeared on the cover of The Hollywood Reporter in December 2019 complete with a tophat and a floating glass of champagne. But given that The Mandalorian ended in December and since then we’ve only had a handful of behind-the-scenes photos of the Child, it’s basically as if Life Day came early.

No matter the scope of The Mandalorian, it’s almost reassuring that one of the key appeals of the series—a freelancer-turned-unlikely-dad and the small and unruly child who adopted him—is still intact. Mainly, he’s cute, ready for action, and he readily fits inside a satchel. And there are satchel memes.

The Mandalorian’s second season premieres on Disney+ on Oct. 30.