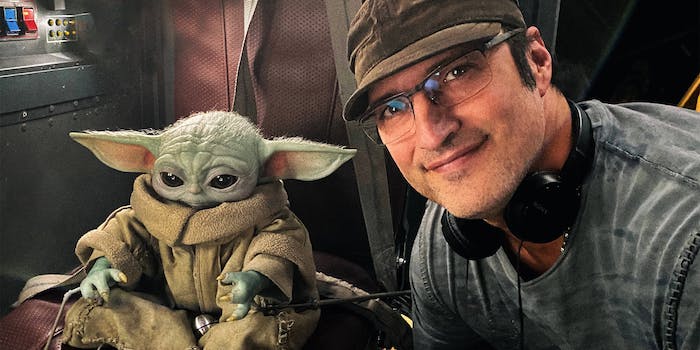 ‘The Mandalorian’ season 2 confirms 2 of its directors

They're joining an already impressive lineup.

With months until its premiere, we know very little about The Mandalorian’s second season. But thanks to May the 4th, we now know about two more creatives going sitting in the director’s chair.

On Monday, both Robert Rodriguez (Alita: Battle Angel) and Peyton Reed (Ant-Man and the Wasp) posted photos to commemorate Star Wars Day on social media. But with their choice of photos, they also revealed that they were among the small group of directors who get to direct episodes of The Mandalorian.

Reed took a simple approach by posting a photo of his director’s chair (with his name stylized in the same font as The Mandalorian logo) and the helmet belonging to the Mandalorian himself while Rodriguez couldn’t resist posting a photo of himself from the set with Baby Yoda while noting that he’s “now had the very rare privilege of directing the biggest star in the universe.”

Both Rodriguez and Reed have ample experience working on big-budget productions and major franchises over the course of their careers, giving them a unique perspective on entering this universe.

While Lucasfilm hasn’t released an official list of directors, we do know at some of the directors who will be helming season 2 episodes through a series of interviews and photos that have appeared online over the past several months.

Dave Filoni, who spent years working in animation before his live-action directorial debut on The Mandalorian’s first season (“The Mandalorian,” “The Gunslinger”), is returning for season 2. In early March, cinematographer Baz Idoine shared a photo of a season 2 clapboard after wrapping production that revealed he’s working on an episode that Filoni is directing.

The clapboard includes a couple of nods to Filoni’s previous work, such as the number 501 (likely for the 501st Legion, a battalion of clone troopers under the command of Anakin Skywalker in Filoni’s animated series Star Wars: The Clone Wars) and drawings of La and Tui, the two spirits who featured at the end of Avatar: The Last Airbender’s first season, which Filoni worked on as a director on before he went to Lucasfilm.

As Lucasfilm creative art manager Phil Szostak noted on Twitter, shows are usually shot out of order, so Filoni’s slate being shared to mark the end of production doesn’t necessarily mean that Filoni is directing the season 2 finale.

He’s not the only season 1 director to return. Variety article from earlier this month that detailed how shows are handing postproduction in the wake of the coronavirus pandemic includes quotes from Rick Famuyiwa (“The Child,” “The Prisoner”), who is credited as a season 2 director.

During the Mandalorian season 1 press conference last year, Filoni revealed that Carl Weathers (who plays Greef Carga on the series) is directing a season 2 episode. And creator Jon Favreau, who wrote many of season 1’s episode, told Entertainment Weekly last year that he planned to “step in” to direct one of the episodes after The Lion King remake made it impossible for him to direct in season 1.

We don’t know how many episodes will be in season 2, how many episodes each of the directors are taking on, or if this is even the full slate of directors, so the final lineup might change before the planned October premiere. But as of right now, Mandalorian’s second season doesn’t have a single woman director on board after Favreau brought Deborah Chow (“The Sin,” “The Reckoning”) and Bryce Dallas Howard (“Sanctuary”) on to direct last season.

But fortunately, this won’t be the last we’ll see some of season 1’s other directors working in the Star Wars universe. More than a month before The Mandalorian premiered, Lucasfilm revealed that Chow would direct the highly anticipated Obi-Wan Kenobi series starring Ewan McGregor (which is now on-hold). And Taika Waititi, who directed the Mandalorian season 1 finale and voiced the bounty hunter droid IG-11, was just unveiled as the director and co-writer of an upcoming Star Wars movie.