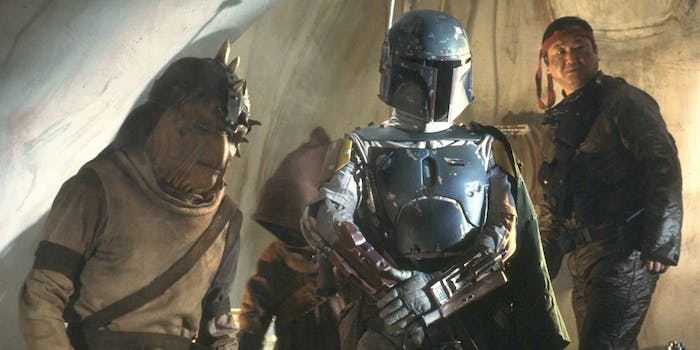 Temuera Morrison will reportedly play Boba Fett in ‘The Mandalorian’

It's not the actor's first time in the 'Star Wars' universe.

The Mandalorian has balanced nostalgia with new stories, but in its second season, it might be bringing in one of Star Wars’ most famous scene stealers.

According to the Hollywood Reporter, Temuera Morrison is set to join The Mandalorian season 2 as the notorious bounty hunter Boba Fett in what’s said to be a small role. Morrison would be joining Rosario Dawson, who’s reportedly set to portray a live-action Ahsoka Tano, as another legacy Star Wars character to make the jump over to The Mandalorian.

While Morrison didn’t play Boba Fett in the original Star Wars trilogy—that was Jeremy Bulloch under Boba Fett’s famous mask—it’s not Morrison’s first time in the Star Wars universe. He played Jango Fett, the so-called Mandalorian bounty hunter whose DNA was used to create a clone army for the Republic in Attack of the Clones. Boba, as Attack of the Clones revealed, is a clone given to Jango and was designed to age naturally.

Boba Fett was last seen falling into a Sarlacc pit in Return of the Jedi, and while many, many books detailing Boba Fett’s exploits exist in the expanded universe, he’s still dead in Star Wars canon. But it’s not completely far-fetched that The Mandalorian could somehow resurrect Boba Fett. After all, Star Wars: The Clone Wars brought back Maul even after Obi-Wan Kenobi sliced him in half with a lightsaber and he fell down a bottomless shaft.

The idea that Boba Fett somehow survived the Sarlacc pit has persisted for years, and a shot at the end of “The Gunslinger,” a season 1 Mandalorian episode in which Din Djarin and Baby Yoda travel to Tatooine, even suggested the possibility of Boba Fett continuing to walk around the planet after a mysterious caped figure approached the body of assassin Fennec Shand.

It’s also possible that Boba Fett might not be the character that Morrison is playing—or the only one. In Attack of the Clones and Revenge of the Sith, he also played the clones who made up the Republic’s army, and thanks to The Clone Wars and Star Wars Rebels, we know that a few clones did make it all the way to the Rebellion era. Most notably Captain Rex, who has a very special connection to Ahsoka Tano that’s explored throughout The Clone Wars.