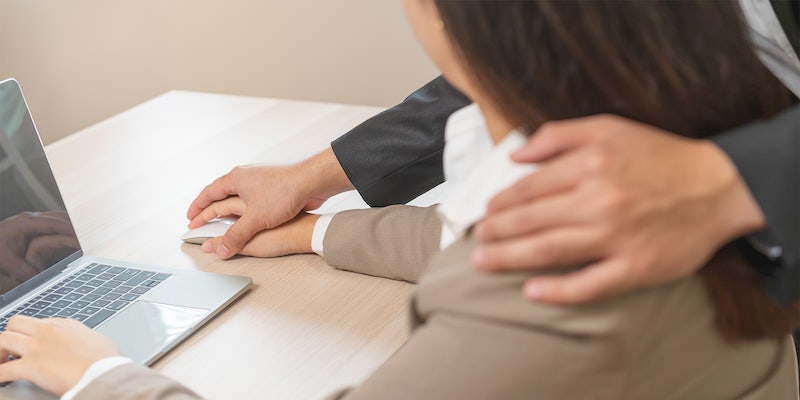 'There's a big power dynamic, not a good base for a relationship.'

A 38-year-old listener called into a podcast hosted by Hasan Piker (@hasandpiker) to get advice on a “situation” with the 24-year-old coworker that he manages, saying that they’re “clicking” and “like the same movies.”

In the podcast clip, posted to Piker’s TikTok on Aug. 4, the caller explains that a woman recently started working at his job and that they started talking.

“I feel like we’re clicking really well and we share similar interests in movies and various hobbies. But there’s a pretty big age gap,” the caller says. “I’m 38, she’s 24, and to add on top of that, I’m her manager.”

As soon as the caller reveals that he manages the woman he is interested in, Piker says, “no,” repeatedly and advises him to “not do this.”

The clip has reached over 839,000 views as of Aug. 16, with commenters debating whether it’s okay for the 38-year-old manager to pursue his much younger subordinate—many pointing to his role as her manager as the bigger issue.

“It’s not really the age gap, it’s him being the manager, just avoid power dynamic relationships, women can be kind at work just so they’re not targeted,” wrote one commenter.

“The age gap isn’t that bad really the manager part, however,” wrote another.

Others suggested that the 24-year-old worker may just be acting friendly due to the “power dynamic,” calling the manager’s behavior “creepy.”

“There’s a big power dynamic, not a good base for a relationship,” one user suggested.

“Y’all we know it’s ‘legally’ allowed, but this power dynamic seems like the dude is just perceiving this feeling cause he’s a MANAGER,” a third added.

The Daily Dot reached out to Piker via email. He did not immediately respond to the request for comment.