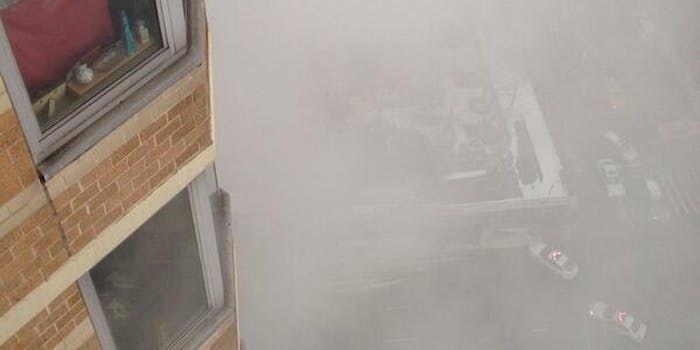 "Stuck on building on 26 floor. Building on fire."

Most people who stopped to witness a Sunday morning apartment fire in a Manhattan high rise saw the terrifying blaze from the ground up.

But building resident Mickey Atwal, trapped with his family on a 26th floor balcony, was forced to watch from above as smoke billowed from the building several floors below. Atwal tweeted about the hair raising experience as it happened.

Stuck on building on 26 floor. Building on fire. pic.twitter.com/c5bDvWke0x

Still stuck. Too much smoke on hallways. Elevators not working. Standing in balcony with wife and 2yr old.

Firemen here in our hallway. Telling us to stay put. Looks like fire started a few floors below. Family safe and in good spirits

One stairwell now safe to walk down. Thanks for all your support.

While Atwal, his wife, and their 2-year-old daughter were OK, ABC News reports that two people were critically injured in the fire, which started in the 20th floor. More than 130 firefighters responded.