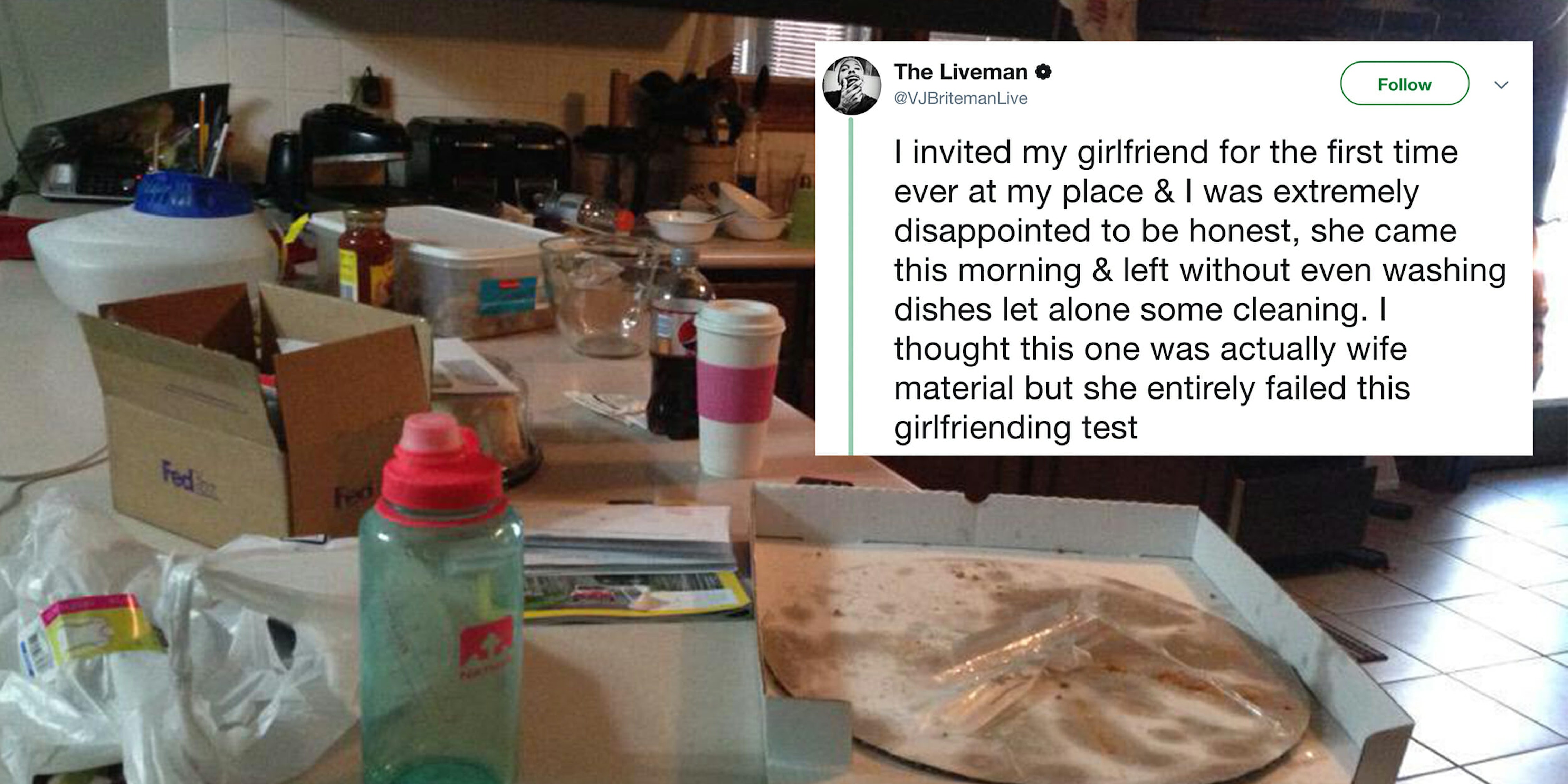 Man intentionally messes up his apartment to ‘test’ his girlfriend, promptly gets dumped

He was left with quite a mess to clean up.

This man thought he had a clever plan: Intentionally mess up his apartment to “test” his girlfriend. If she cleaned up after him, he would know she was, in fact, good enough to marry.

I invited my girlfriend for the first time ever at my place & I was extremely disappointed to be honest, she came this morning & left without even washing dishes let alone some cleaning. I thought this one was actually wife material but she entirely failed this girlfriending test pic.twitter.com/iCmdVcB3NE

Yes I deliberately messed my kitchen up I ain't the filthiest or untidy nigga. I did all this cause it was just a girlfriend test. Chill now

Next time y'all visiting ya mans house make damn sure y'all clean it up, they could be testing y'all if y'all qualify to be wifed one day. ❤

A quick glance through his Twitter feed shows that his kind of “wisdom” is pretty on brand.

Twitter, to say the least, was not thrilled with his advice on how to get “wifed.”

First of all, how do u invite someone to ur home with it looking like this?? ESPECIALLY when it's their first time there. U basically just told her u dirty

(I'm ignoring the blatant misogyny because, I mean, it's just tired at this point)

Lol and I bet she left thinking damn I thought this one was husband material but if he thinks he can live like a pig & im just gonna spend the rest of my life cleaning up after him he got the wrong one…. pic.twitter.com/yB8dzwIyj6

But things only got worse for him (and funnier for the rest of us) when some hero showed the tweet to his girlfriend.

Some idiot somehow showed my gf this tweet and got dumped me immediately guess what I'm officially single. Congratulations. pic.twitter.com/ZHBHsWVdu5

Which just goes to show that, for all the frustration and negativity it causes, Twitter can occasionally be a force for good.

Well will ya look at that, she /is/ capable of taking out the trash pic.twitter.com/jgAeZWAI2S

As ridiculous as this man’s thinking may seem, it’s important to remember that he’s far from being alone in his feelings about a woman’s role in the world. In fact, only a few decades ago his “test” could have appeared unironically in many popular mainstream magazines. Although there’s still a lot of progress to be made, it’s nice to know that people, for the most part, don’t buy into this particular brand of bullshit anymore, and that men like this are left to clean up their own messes.