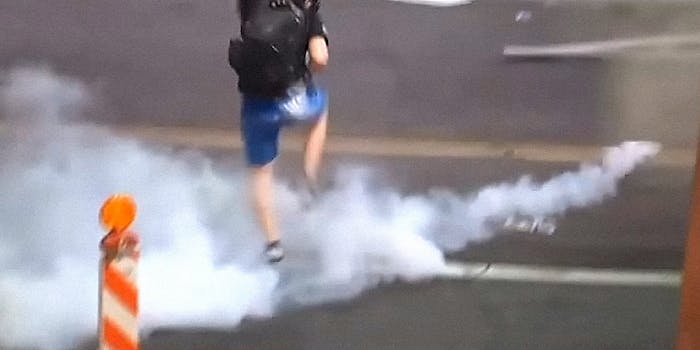 Man shot in crotch with pepperball outs himself in Reddit AMA, gets arrested

The internet has been equal parts horrified and amused by a video of a Phoenix protester who kicked a can of tear gas back at police and was then immediately shot in the crotch with a pepperball earlier this week.

The man, now identified as 29-year-old Joshua Stuart Cobin of Scottsdale, Arizona, was in Phoenix on Tuesday and took part in the protest against President Donald Trump’s rally.

In the video, Cobin can be seen falling to the ground before a bystander helps him walk away. That might have been the end of the incident for him, but he decided to start a Reddit AMA (Ask Me Anything) where he identified himself as the man from the video.

Below is one of the picture he posted to Reddit, showing him without his gasmask in the early hours of the protest.

Cobin began his AMA by stating he is not part of the antifa movement. Also his dick is OK.

Here’s what he wrote:

Someone thought to ask if he was worried that publicly outing himself would lead to his arrest, but Cobin replied that it wouldn’t be a problem.

Turns out he should have been worried, because he has now been arrested. Phoenix police Sgt. Jonathan Howard released a statement on Thursday saying Cobin was arrested on three counts of aggravated assault on a police officer and one count of unlawful assembly.  “Many of you will recognize this man as he has posted images and admissions to his crime on social and local media outlets,” Howard said in the statement.

Cobin, one of six people who have been arrested since the protest, has yet to release a statement.