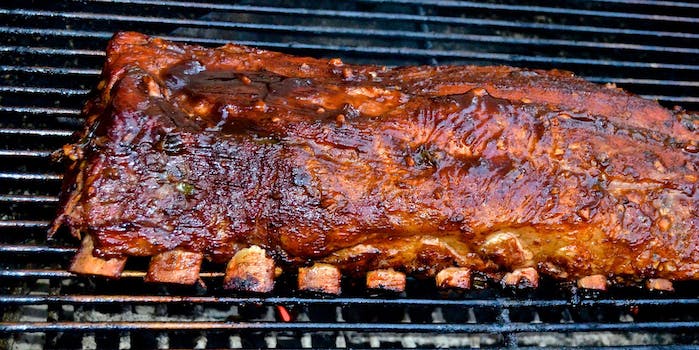 Robert Wright is a man with priorities.

Fresno, California man Robert Wright—though he’s probably going to be known as the Ribs Guy for the rest of his life—heroically saved both his family and his barbecue ribs from a recent apartment fire.

FOX 26 was on the scene to get all the details, and Wright was more than willing to dish out the story at high speed while displaying his fine rack of ribs. He did news crews the stated favor of keeping it PG, but the smoke that was already in his lungs, mentioned later in the interview, might have caused a slip-up or two.

Wright, though his first thought was for his ribs, said that he rescued his children from the blaze before going back to collect the meat. An unrelated woman and her child were hospitalized with smoke inhalation, but there were no other reported injuries.

While some viewers might be left wondering, “Who cooks ribs and hot links at 3am,” the real question is whether this story might have turned tragic if Wright hadn’t been up and working his magic at the grill. It’s possible that Wright’s ribs are the real hero of this situation, responsible for saving everyone in the building.

Here’s hoping Wright got not only a nice motel room but some extra sauce to put on those ribs.