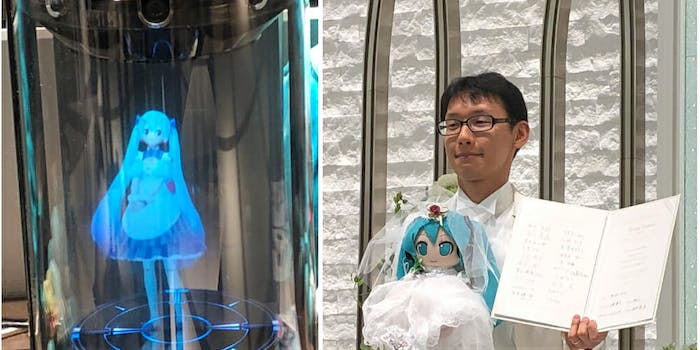 A man ‘married’ a hologram in a ‘cross-dimensional’ wedding

These two will likely be together until death. Literally.

We’ve seen holograms take the stage in the form of deceased celebrities. And now, a Japanese man named Akihiko Kondo says he married a hologram during a formal ceremony in a Tokyo hall, AFP News reports.

Forty people attended the wedding of the 35-year-old and his “bride,”  a virtual reality singer named Hatsune Miku. However, none of Kondo’s family were in attendance.

“For mother, it wasn’t something to celebrate,” he told AFP News.

Miku attended the $17,600 wedding in the form of a cat-sized stuffed doll.

“I’m in love with the whole concept of Hatsune Miku but I got married to the Miku of my house,” Kondo said.

In his house, Miku takes the form of a moving, talking hologram that floats in a $2,800 desktop device. The school administrator has been living with her as his partner since March.

VIDEO: 'Married' to a hologram. Akihiko Kondo's mother refused to go to her only son's wedding in Tokyo this month, but perhaps that isn't such a surprise: he was marrying a virtual reality character pic.twitter.com/hKEuITVFMI

Kondo doesn’t find his marriage to be out of the ordinary. In fact, he views himself as any other married man. His holographic wife wakes him up in the morning and tells him to go to bed at night. He sleeps next to the doll version of Miku, who wears a wedding ring around her left wrist.

The couple’s marriage has no legal standing, but Kondo claims he is unbothered by it. He was issued a “marriage certificate” by Gatebox, the company that produces the hologram device featuring Miku. The certificate says they wed “beyond dimensions.” Kondo isn’t even the first person to receive this certificate. Gatebox has issued more than 3,700 certificates for “cross-dimension” marriages, he said.

He hopes his public wedding will inspire others to openly marry their holographic partners.

“There must be some people who can’t come forward and say they want to hold a wedding. I want to give them a supportive push,” he said.

People on Twitter chimed in with jokes that their love life may hold the same fate.

“A man in Japan got married to a hologram and I’m happy to say that that’s where my love life is heading,” one person on Twitter said.

“There’s hope for some of us!! Ima get myself a big booty hologram wifey!” another person wrote.

There’s hope for some of us!! Ima get myself a big booty hologram wifey!

Man says he got married to a hologram in Japan https://t.co/KNPpCxyM45

Although the whole marriage seems a bit bizarre, Kondo did make one point that’s hard to argue with: Two-dimensional characters can’t cheat, age or die. These two will likely be together until death does them part. Literally.