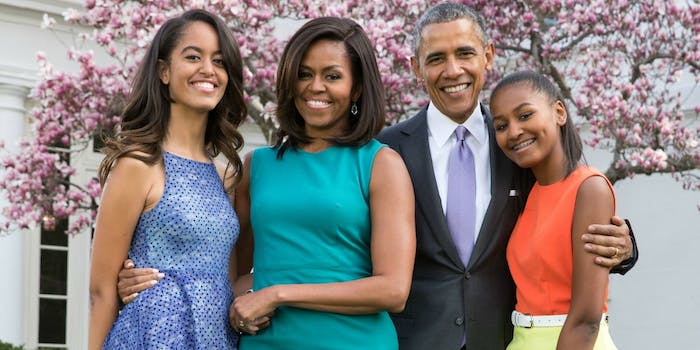 Brown University had no chill when Malia Obama came to visit

Malia Obama is just like many other 17-year-olds. She’s nearing the end of her high school career, and she’s thinking about where she wants to apply for college. She’s even had a few in-person visits to check out campuses, dining halls, and the social scenes.

Of course, Obama is also in no way like any other 17-year-old, because she’s also the president’s daughter. Which means the Secret Service is with her all the way, and every step she takes is scrutinized on social media and on the Internet at large. Isn’t that right, Brown University students who could not stop talking about seeing Malia all over campus last weekend?

Luckily, there was photo proof that Malia actually was on campus.

By the way, does anybody know what Malia had to eat?

Ah, but didn’t anybody see her at any national chain restaurants?

After all that food, though, she probably went to bed early, huh?

This wasn’t Malia’s first time visiting Brown. She also toured the Ivy League school in March, along with Princeton and Yale. According to GoLocalProv, “Malia was visiting a friend at Brown this weekend and stayed in Morris Hall at Brown. Security around the dorm building was high and visible.”

But seriously, Brown, get a hold of yourself. Do you think an institution like Bob Jones University or Liberty University would be falling all over themselves to note that somebody saw Malia on campus? No, of course not.

Either way, here’s hoping the Obamas are a little more chilled out than the Clintons when they dropped off Chelsea at Stanford in 1997. From Time magazine …

Chelsea Clinton’s parents showed up at her Stanford dorm last Friday night not only mushy but also in a motorcade flanked by security guards and nearly 250 of their closest journalists … The rumors floating around campus the week of her arrival ranged between true and scary: bulletproof glass in her room (yes), cameras in the hallways (yes) and bathroom (no), massive construction on campus to transform the underground steam tunnels into escape routes (no), that she chose Stanford to be with some mystery frat-boy boyfriend (no), that Secret Service men live in the rooms around and above and below her to prevent people from drilling into her room and poisoning her, Mission: Impossible-style (no), and that she has a computer chip implanted in her neck to track her. …

But the thing that obsessed Stanford most was the Secret Service men, who, as they did for Jack Ford, will dress like students and live in the dorm. Will they listen in while Chelsea hooks up? If they go to class with her, will they have to do the assigned reading? And, most important, will they bust students for underage drinking? Nevertheless, the California campus was trying to be as New York blase as possible. While the most laid-back school in the country started looking more like backstage at a Puff Daddy concert (metal detectors, guys in fatigues, and a laminated, neck-rope pass for everyone – students, parents, faculty, press), people tried to act cool.

Tried to act cool.  Huh, how about giving that a shot next time, Brown?