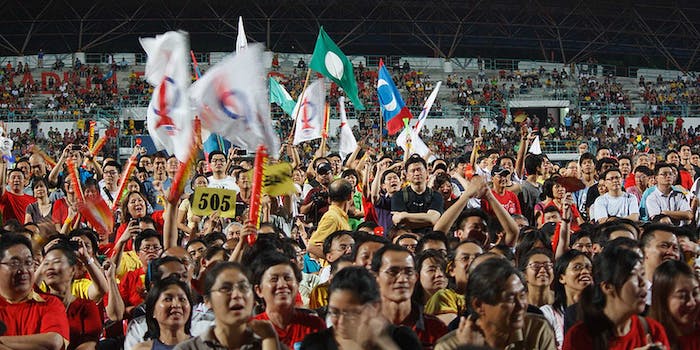 In the wake of last Sunday's elections, the government is going after bloggers and online publications with renewed vigor.

In advance of last Sunday’s election, Malaysia’s governing party lowered the boom on the country’s vibrant independent online media. Independent online newspapers in particular were “targeted,” according to Reuters. And in the wake of the elections, the government is going after them with renewed vigor.

One of the largest and most prominent publications is Malaysiakini, run by Premesh Chandran.

“During the 2008 election we were wiped off the Internet,” Chandran told Reuters last week. “Our concern is that we’ll see a repeat of that on May 5. Can we really live without independent media on election night, given that both sides might not accept the result?”

The elections returned the Barisan Nasional (BN) party to power in a coalition with two others. They’re not taking the criticism they received from these online upstarts in good grace, going after not just the influential online publications but individuals as well. BN has ruled the country since independence in the mid-1950s.

“Two men who posted Tweets have been arrested and bloggers are being targeted in police investigations as opposition leader Anwar Ibrahim vowed to lead a ‘fierce movement’  to reform the country’s legal system,” wrote Lindsay Murdoch in Australia’s The Age, “and have banned a planned rally to protest the election.”

The bloggers, King Jason and Papa Gomo, both accused the governing coalition and government officialdom of voter fraud.

In a media environment where the big newspapers, news sites and television networks hewed unreservedly to the government line, praising the BN alliance candidates and criticizing the opposition.

As with many of its neighbors, Malaysia has an ethnically indigenous Muslim majority, especially in the provinces where the ethnic Malay group dominates and which is favored by the election system. Much (though by no means all) of the opposition is ethnically Chinese. So some of the crackdown is based on race: criticism of the BN is “racist.” No doubt some was, but hardly all or even most. Nevertheless, that is the main rationale for the crackdown.

“We will continue monitoring social media and we will not rest until those who circulate racial postings online are detained,”  national police chief Ismail Omar told the official Malaysian news agency, Bernama. “Anyone who tries to instil hate and compromise public safety will face the music.

“What they are trying to do is to disrupt the peace in this country. Often this information shared on Facebook, Twitter, blogs and text messages were nothing but hearsay or simply untrue.”