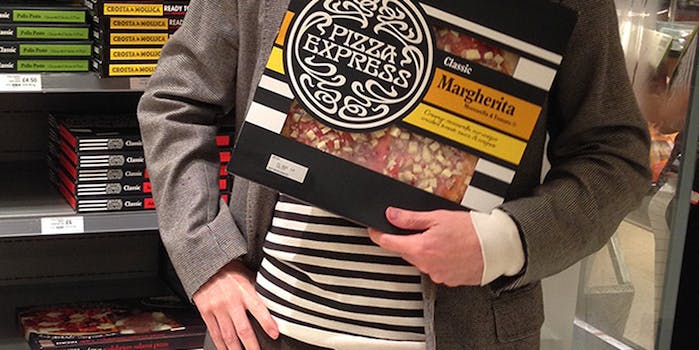 If it’s not a sponsored tweet, why bother being nice?

I asked Game of Thrones’ Maisie Williams about her unrequited love for Pizza Express.

Game of Thrones’ Arya Stark is huge on Twitter. This week, the 17-year-old actress who plays her, Maisie Williams, decided to spare 42 characters and thank a company called Pizza Express for its kindness and general service.

Pizza Express is a Chinese-owned restaurant group that’s popular among British teens. Established in 1965, it sells microwavable pizza from more than 400 branches.

Here’s me with a Pizza Express box. Sure, it’s possible for a celebrity to tweet praise for a pizza brand without receiving a large amount of dough—but it’s unexpected. Many wondered whether Williams had signed a deal with Hony Capital (the Chinese owners). If not, why bother publicizing the company?

Well, everyone likes pizza, and compliments are lovely. But kindness takes energy and time, and time is money. So why be nice when you can also get paid to be nice?

It’s a fair deal. Complimenting a brand (not to mention directly @-mentioning it) helps that business make money it could otherwise spend on promoted tweets, such as tweeting one’s Uber code or vining a Chipotle feast to millions of followers. An unpaid mention from a Game of Thrones star? That’s a brand’s dream.

I wanted to know why Williams loved Pizza Express enough to tweet a sincere compliment.

Maisie replied to me:

“@nnimrodd: If its not a sponsored tweet why bother, @Maisie_Williams ?” Because it’s nice to thank people when they do kind things..

Many of her fans saw this as proof of how kind she is:

@Maisie_Williams @nnimrodd Maisie, I totally agree, being nice makes the world nicer, and also it doesn’t have to be a question of money.

@Maisie_Williams imagine that, eh? wanting to say thanks when someone does something nice! the cheek! @nnimrodd

@Maisie_Williams @nnimrodd Such a long road ahead of you Maisie if you’re going to teach Manners to the internet! but it’s a worthy cause!

Perhaps Pizza Express does kind things for all its customers, not just HBO stars. But the actress has put the chain in a funny position. Free plugs on Twitter are nice, but they set an unfair precedent for users who depend on sponsored posts being worth something. Give a brand a cookie, and it might tweet at you for some milk.

Williams should absolutely invoice Pizza Express, even in hindsight.