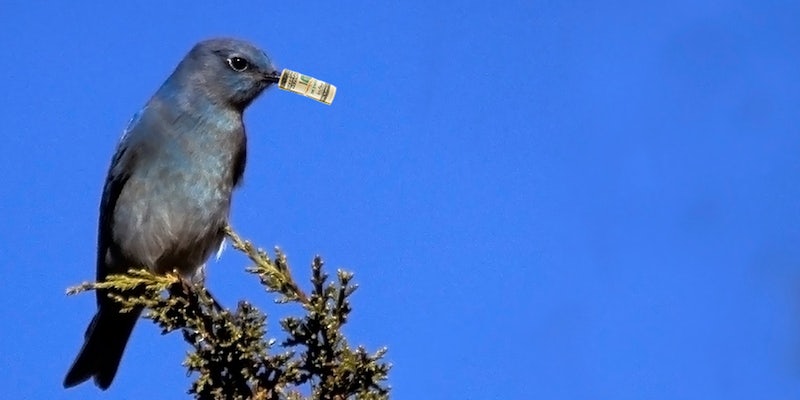 I used to hate those corporate shills who sacrificed integrity for quick cash. And then I became one of them.

Sponsored tweets. The words alone read like nails on a chalkboard. If you follow some of Twitter’s best parody and humor accounts, no doubt you’ve seen a post that’s tagged with #spon or #ad. There’s also a solid chance that as soon as you saw that sponsored tweet, you clicked “unfollow.”

“Teen Twitter”—Accounts like @Girlposts and @teenagersfact, all ushering in sentiments like “If you have my heart, please don’t abuse it”—is a lucrative industry that grinds the emotions and humor of high schoolers into advertising revenue. Who really profits from it? Clickbait sites and ad-filled BuzzFeed knockoffs like ChaCha and MyLikes.

I used to hate those corporate shills who sacrificed integrity for quick cash. And then I became one of them.

Kevin Caudle is a 21-year-old college student and the owner of @The_HelenKeller, a two-year-old, 550,000-follower-strong Twitter feed of—you guessed it—Helen Keller jokes. Originally, he never intended to make any money off of the account, but he began to notice that popular Twitter accounts with creative viral content, like White Girl Problems and Shit My Dad Says, were getting picked up for book deals and television shows.

Knowing that in-poor-taste gags about a deaf and blind (and dead) woman were not going to carry him into the literary or entertainment world, he started researching ways in which he could make a few extra bucks. “College tuition was not going to pay itself,” he told me.

“I spend so much time coming up with the jokes,” he explained, “I figured followers wouldn’t mind clicking an ad here or there, but I was afraid people would see me as a sellout, or they’d unfollow the account when they saw I was doing sponsored tweets.”

Caudle put out his first sponsored tweet in early 2012, when @The_HelenKeller had around 25,000 followers. After a full 24 hours of leaving the link up on his timeline, the tweet brought in an impressive $68. It also cost him nearly 50 followers.

He did the math: Just one sponsored tweet a day for a month could bring in about $1,800. “I realized that if I could keep growing the account with new content while tweeting out one link a day,” he said, “I could be making some serious money.”

My cuz is 19 and she says they have these at college partiez!!!! so chill. https://t.co/fL7VxGCPSV

In 2012, I started @YourAwayMessage, a Twitter account devoted to nostalgic teenage throwbacks for Millennials. I didn’t think it would become a viral feed that would sustain itself for nearly a year. I just wanted to make my friends laugh. I figured it would be over after a few weeks’ worth of jokes.

When I woke up the next morning, I had 22,000 followers. In under a week, it reached 100,000 followers; on day nine, it was printed in New York magazine’s Approval Matrix. Then these questions began to fill my inbox: “Will you be writing a book?” “How about a television show?” Advertisers drooled over the opportunity to target so many young people, and the opportunities to make money from @YourAwayMessage were virtually endless.

But book deals and television shows take a while. And as YAM began to take up more of my life, I couldn’t justify the time I was spending coming up with three to four strong posts per day.

That’s when Kevin Caudle reached out to me.

Caudle had been running paid ChaCha ads on his account for more than a year. He asked if I wanted a piece of the pie.

ChaCha.com provides low-grade listicles smothered in banner ads. It provides customized links that high-profile Twitter accounts can promote and profit from on a pay-per-click basis. The value of each ad is tiny—around one or two cents per click—so the more followers you have, the more lucrative this promo becomes.

Caudle mentioned he would get a referral payout for recommending me, and we exchanged many emails before I made my decision. He addressed my main concern: Followers appreciate a clean feed, free of corporate corruption, and they’d revolt if they felt I was selling out.

“In my experience,” he said, “most followers don’t mind clicking an ad here or there, if you’re still providing good content.” He said that even the fans who called him a sellout kept following. “They wanted to make their opinions known. I get that.”

Amber Gordon, who manages the @DennysDiner brand account and also actively engages on her personal feed, @MissAmbear, says there’s a difference between sponsored tweets and the official Twitter ads that show up in your feed whether you like it or not. “The latter is a lot more invasive,” she explained in an email.

“As far as parody or humor paid tweets go, it doesn’t bother me. I don’t have to click the link; I can just keep scrolling. Or if I really love the account and want to help its creator, I’ll click the link and click out. It’s based on impressions.

But I felt cheap for even considering it. I wanted to be better than the generic teen Twitter accounts like @Notebook and @sodamntrue, or the image macro–filled teen Facebook groups that exist solely to make money for adults. I was afraid sponsored posts would change me, the human being who was writing jokes on the Internet.

And as soon as I posted one out-of-character tweet, I’d never be able to go back.

Caudle feared the unfollows too. It took him “forever to pull the trigger,” he said. “But people unfollow all the time, regardless. People will start unfollowing once they get bored or feel like they’ve heard or seen it all. Your account will keep growing, but you will lose a few followers. That goes for any Twitter account. Plus, people are still following your account every day. I wouldn’t have gotten to a half-million followers if the sponsored tweets were really that much of a buzzkill. You’ll be fine.”

But the proof, and final straw for me, was in the pudding.

Caudle told me he can bring in anywhere between $50 and 100 per post. He gets even more from retweeting sponsored posts on his other accounts—“like, Girl Facts or Facts About Guys, really generic stuff”—onto @The_HelenKeller. “My monthly Twitter income varies depending on how busy I am and what kind of sponsored tweets are available to post,” he said, “but my best month so far brought in over $5,000.” A rep for ChaCha told me the service has “users who can make up to $5,000 a day, depending. It’s what you make of it, and we pay out.”

I wouldn’t sell my soul for a dollar amount, but I could sell some space to help pay back some credit card debt, future rent payments, dinners out, wedding gifts, cab rides… $5,000 was real money. $5,000 could make a difference.

I held my breath and sent out my first sponsored tweet in February 2013. My fears were immediately realized. I was overwhelmed by a barrage of groans. 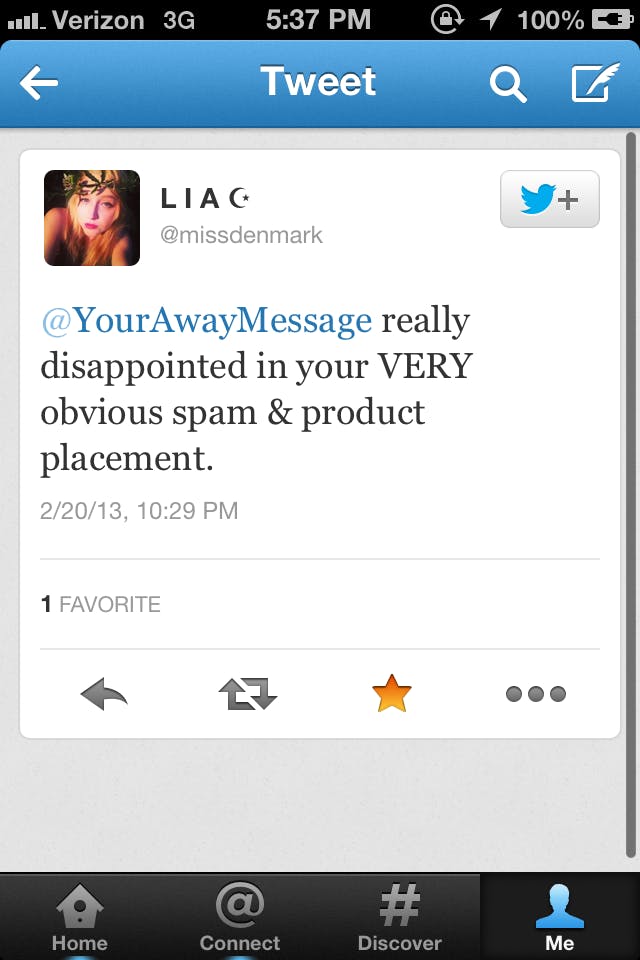 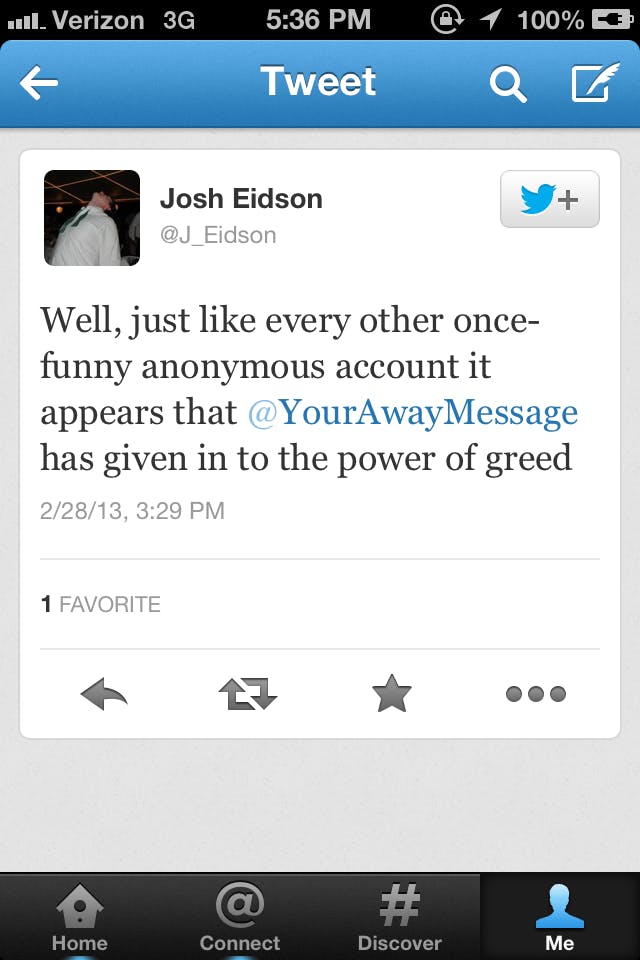 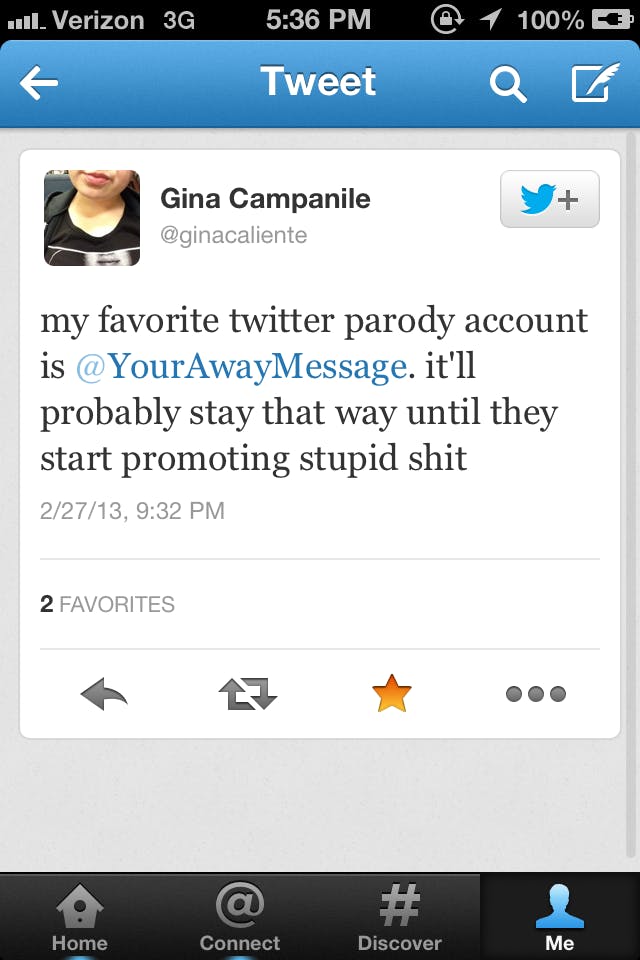 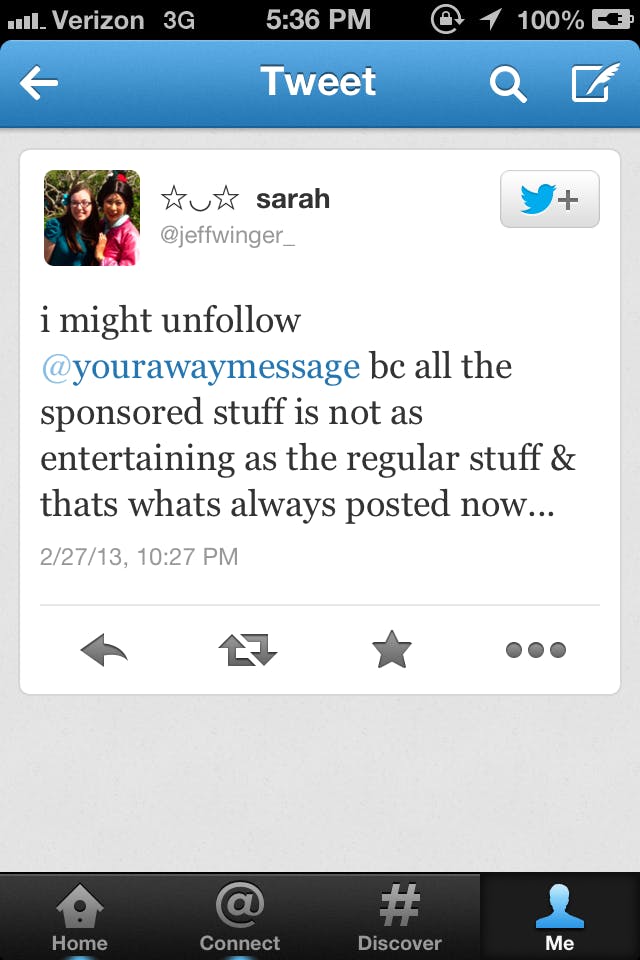 At first, I fought back on my personal account.

“Don’t I deserve to make a dollar or two?” I’d write. “I work hard to come up with this material. I have bills to pay, like everyone else.”

A lot of people were understanding. I got a lot of “Well, now that I can put a face to a name…” tweets of forgiveness from followers who were quick to snap at me. I was replying to each and every criticism, and it was beginning to look more pathetic than the sponsored ads themselves. I later deleted those tweets, determined to own my choice to run sponsored content.

Once the need to defend myself subsided, I would passive-aggressively favorite the sporadic critical replies. I couldn’t help myself.

But I continued to post ads—four times a week, and never anything that promoted content that wasn’t around when AIM was popular. That meant nothing from 2013, and definitely nothing about Facebook.

I was making between $15 and $50 per day, more on the days the ad went out, and less on the days I was getting residual money from late visitors. (I keep my sponsored posts up, while @The_HelenKeller’s go down after an hour.) The first month I brought in $1,200.

Caudle knew what he was talking about. Now I receive hardly any complaints, and my follower account has increased by 21,000 followers since February.

OMG this is what they are saying 2 the seniors for grad this year?? bit.ly/105cyre

If you had a told me a year ago I would be making a supplemental income from tweeting, I would have said, “I wish.” Like Caudle, who told me he was able to pay a chunk of his tuition using ChaCha money, I paid down a credit card bill. Now I set a goal to make enough money each month to cover exactly half of my rent.

I’ve been asked before if I feel like I’m “cheating” the system by taking advantage of a successful Twitter account. I used to push it under the rug, say I got lucky, and that was it. I did get lucky, but I also successfully executed an idea. The lucky part is that other people thought it was as good as I hoped it would be.

Everyone wants free content. In the same breath, we want monetary credit for what we do. We deal with YouTube ads, Spotify ads, Pandora ads, even Twitter ads we can’t simply unfollow.

If running paid tweets on my account were doing severe damage to the foundation I built on YAM, I wouldn’t do it. Plus, it’s given my friends fodder for constant teasing. But I often challenge them immediately: If they were in my shoes, would they pass up an easy opportunity to profit?

The answer is always no.