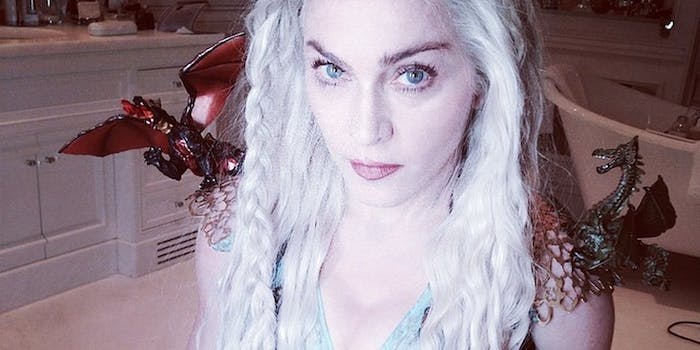 No Mother of Dragons is complete without the dragons.

The Queen of Pop is channeling a queen of a different sort.

Madonna dressed up as Game of Thrones character Daenerys Targaryen for the Jewish holiday Purim in a costume that even some of the most dedicated cosplayers could admire.

The singer channels her inner Khaleesi by donning a platinum-blonde wig, a brown corset, a light blue dress, and brass bangles. It’s not an exact replica, but it’s a close rendering of an outfit Daenerys wore in season 2.

And no Mother of Dragons costume is complete without some dragons.

Madonna, who practices Kabbalah, a form of Jewish mysticism, isn’t just dressing up as Daenerys in preparation for season 4. Purim is a celebration of the Jewish community’s escape from persecution and destruction in ancient times from the Persian Empire, and wearing costumes is one of the many traditions of Purim, which also includes public readings, aiding the poor, and indulging in a massive feast.

For Madonna and Daenerys, it’s probably a feast fit for a queen.