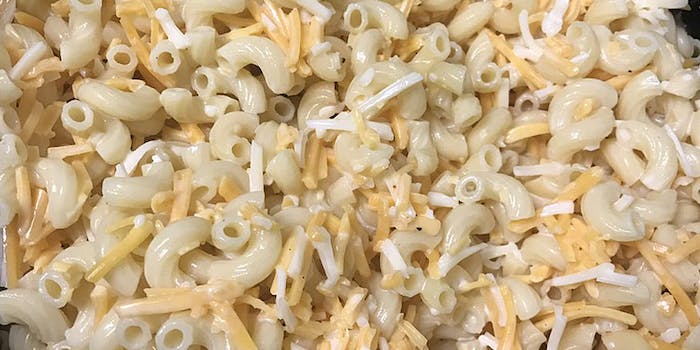 This is mac, and it is cheese. It is not mac and cheese.

Jan Levinson publicly called out a coworker for this weak effort, which was either lazy or just totally uninformed. Had this person ever made mac and cheese before? Had they ever eaten it? Where was the seasoning?

Twitter had all these questions and more, but the one thing they could agree on was this: that’s not what mac and cheese is supposed to look like. Bruh.

This is not mac and cheese. It is mac, with some cheese, touching each other.

Where's the pepper? Why is the cheese not melted? Is that even hot?? This must be a cheese pasta salad

Many suggested that this disaster had a cultural component and that the bad macaroni dish was some white people shit.

This needs to be sent back to the dark pits of caucasity from whence it came…..da fuq?

White people got a lot to answer for on Judgement Day

White people, meanwhile, did not want any credit for it.

Caucasity refuses to accept that mess. Now if the person had brought a bowl of Kraft Dinner, we would accept the blame.

We might've all been raised on Kraft mac & cheese, but we all KNOW the mac & cheese above is absolute garbage

Although the world disowned the mac and cheese, it may not even have been the worst potluck dish in that Twitter thread. Another poster had a story of a coworker who misunderstood food even more horribly than the mac and cheese lady. The only reason this “cornbread” hasn’t gone viral is because there’s no picture to go with it:

This reminds me of a coworker who brought us "cornbread" which was literally just bread but with random kernels of corn baked into it.