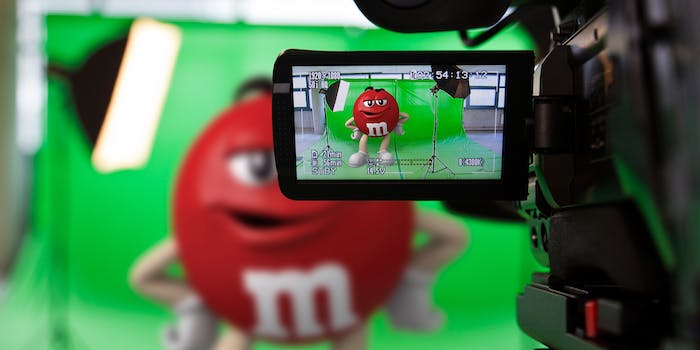 Make my check out to 'Cash.'

The M&M’s Movie—it WILL exist!

I’m not a screenwriter, a producer, or a director, but I know what I like. I’m a consumer who has seen his fair share of mind-numbing ads for truly repugnant films. Angry Birds, Minions, Toy Story: garbage, garbage, garbage. I am also a businessman, and the other day an idea struck me so hard it made me see stars and dollar signs. The M&M’s Movie, starring the two M&M’s we know and love from commercials and advertising, Red and Yellow. I admit this idea seems a bit derivative, but I can’t tell you how upset and jealous I am that the bigwigs in Hollyweird are going to be making billions of dollars off of the planned Angry Birds 2 and the upcoming Trolls movies. So it’s time to get mine.

My plan: Call up M&M’s parent company Mars, Inc. and pitch my idea for one of the greatest marketing crossovers in history (and, surely, one of the highest grossing films of the new century).

Now, I’m no dummy. I knew it would take a lot of hard work to get to whoever was at the top of the corporate marketing chain, and I didn’t want to blow that opportunity. So I began with a little research. Unfortunately I learned that the road to success would not be so easy.

Immediately I was stymied. A simple Google search led me to the Mars, Inc. marketing principles page where my entire idea was put into jeopardy.

NO MARKETING TO CHILDREN

A cursory skim lead me to the following conclusions:

This put me at a disadvantage because the idea for an M&M’s movie would ostensibly revolve around marketing to children, involve child actors eating snack foods, and use screensavers as a marketing strategy. However, the next conclusion was a shocker.

2) Mars does not create new characters

Though we stick with some old favorites, such as the M&M’S® Characters, we’ve decided to never create new characters that appeal especially to children for our chocolate, gum and confections brands. The actions and speech of the M&M’S® Characters are intended for an audience older than 12 years of age, and we continue to emphasize their mature personalities and adult characteristics.

I was fucked. The cornerstone of any successful children’s franchise is the freedom to create newer and better characters that appeal to children! And what child would want to see a movie stuffed with characters whose very features are distinguished by their age?! That’s like making Labyrinth about the guy who laid the mortar for the labyrinth!

How was I going to make this work? There was some hope. Some of these seemed like blatant lies (insert photos including NASCAR advertising) which means that perhaps someone, somewhere in the company would be smart enough to pursue this idea.

But relying on the ethical compromise of whoever I eventually got on the phone didn’t seem like a smart plan. So I decided to create an alternative which would respect and support the Mars, Inc. Principles in Action 2015 Spotlight to achieve 100 percent responsible marketing. These M&M’s would need to appeal to a more mature audience.

I decided that the most effective way to brand an M&M movie for adults was to stick to a formula which adults already love. So, naturally, I took the script for Pulp Fiction and switched all of the names and pronouns to candy-coated genius.

[When you came pulling in here, did you notice a sign out in front of my house that said “Dead Yellow Peanut M&M Storage”?]

Again, I’m no dummy. I know this is a terrible idea. Anybody does! Which is what I’m relying on. This approach allowed me to convince whoever was on the line that an adult version of the M&M’s movie was so awful that it would be MORE ethical to market the movie directly to children.

Thus my pitch was honed.

In order not to be caught with my pants down, I decided to (in the event that they actually wanted to utilize this fantastic idea) create an outline for the potential children’s M&M’s movie. I’m not a screenwriter, but there are a ton of similarly conceived recent films that have made an assload of cash, so I took the Wikipedia plot descriptions for five 2016 children’s releases and ran them through a predictive text generator to get a sense of what powers hits such as the upcoming Trolls film, Finding Dory, Alice Through the Looking Glass, The Angry Birds Movie, and Zootopia. After a quick cleanup, I had my logline and tagline.

[One day, Red M&M, a guilt-ridden court volunteer, returns to his feral kingdom where he befriends (via echolocation) Yellow Peanut M&M (a con artist) in order to push the Peanutosphere to tax evasion. Taxes are, after all, theft.

Intent upon foiling their plans, the Green Queen sends forth an army of M&M Cookies to capture the duo. Bound for the castle, the team fear certain defeat until a gaggle of flying M&M Minis bring them their heroic savior: Santa Claus. He bellows out a deafening “THEY DO EXIST” and the Green Queen’s resolve softens. In the end, the duo becomes a rock band with Santa and hang out with The Trolls.

This summer, “Mmmm” is spelled with two M’s.]

I also looked up the names of the entire marketing team at Mars, Inc. and their corporate office number so that I would have a better chance of bluffing my way to the top (these names are censored from the phone call below).

Prepared for anything but defeat, I called Mars, Inc.

As you can hear, Mars, Inc. had somehow anticipated my moves. An entire extension on the phone menu was dedicated to telling me that they did not want my idea handed to them. In fact, not taking “unsolicited” marketing ideas is Mars, Inc. policy.

This didn’t stop me, obviously, and at the end of my phone call, I felt a little bit defeated. But I also felt hopeful. Vanessa really liked my idea and promised to give my entire pitch to the marketing team in person. Is this how dreams come true? I can only assume that this is standard practice in large corporations; an idea must be vetted by industry professionals. Vanessa may not have been the person at the very top, but she can get to them.

With my idea safely in her hands, I’m confident I’ll hear back soon. When I do, I’ll tell them to make my check out to “Cash.” And in the memo line, I’ll make them write, “For a sweet idea.” And I’ll make [REDACTED] shake my hand.