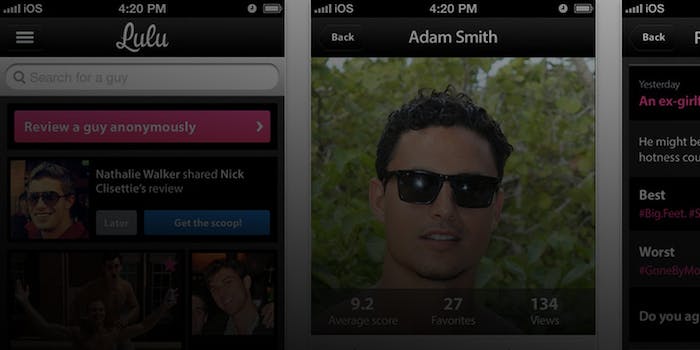 How dudes can cheat Lulu, the dating app that crosses Yelp with OkCupid

The only thing more inevitable than this technology is somebody attempting to game it. That somebody is me.

Lulu, an app called “Sex and the City marries Facebook” and “the girls-only Yelp for boys,” allows its female clientele to rate men as easily (and bluntly) as if they were falafel joints. The only thing more inevitable than this technology is somebody attempting to game it.

That somebody is me.

The immediate setback was Lulu’s gender restriction. You have to log in via Facebook, and though I never told Zuckerberg that I’m a man, Lulu quickly decided I was—unfair name bias—hitting me with this error message:

Dude, you’re a DUDE. We run a strict policy about this. (We still love you anyway!) We have a special app for you!

That app would be Lulu Dude, which apparently caters directly to dudes trying to access regular Lulu. Its description reads:

Rock your profile on Lulu! Find out if girls are checking you out and what they REALLY think about sex and relationships.

The site is transparently fake and designed to embarrass anyone vain or careless enough to “Invite 25 friends to INSTANTLY reveal” their Lulu score. Given that these scores are for ladies’ eyes only, with plenty of security to that effect, skepticism should prevail here.

If you bring up the site online, it teases that “2 Girls have favorited you” and “3 Girls have checked you out”—even before you tell it who you are. It also asks to use your location and begins to send you faintly mocking emails (“Hey, handsome,” “Congrats, big man!”) that  encourage the recipient to click on dubious blind links.

This Lulu Dude was not so easily duped. But neither was the app. It hardly seemed worthwhile to assemble a dummy Facebook account, so to further my scheme I chose to enlist the aid of a lady friend, who shall remain anonymous so that her defection to the patriarchy goes unpunished. Once she had calmed down about the ability to leave extensive commentary regarding “Sack Skills,” she complained that the app kept crashing.

We already knew one trick to succeeding on Lulu, however: be good in the sack. Either that or score the #BigFeet tag, which seems laughably euphemistic in the circumstances. To judge by the app’s tag options, women are just as shallow as men supposedly are.

Who cares if he votes, am I right, ladies? The quizzing system Lulu uses to review guys is decidedly Cosmopolitan, big “C”: you’ll be asked about his looks, his sense of humor, his predilection toward impressing a girl with flowers, his career prospects, and his ability to commit.

Eventually my accomplice found my profile, only to discover that I had no reviews. I was devastated. In order to anonymously post any feedback about me, she was subjected to a battery of questions, beginning with the nature of our relationship (or former relationship, as the case may be). Notably, there was no “Casual Affair” option.

It then went on to ask about what our first kiss felt like:

This was immediately confusing. If I were merely a “Crush,” “Friend,” or “Relative” (shudder), how would she know how I kiss? The physical stuff quickly shaded over into traditional “marriage material” questions, such as: Is he into commitment? Would your parents approve?

This is the central confusion of Lulu. It can’t decide whether it’s a simple meat market or the poor woman’s version of eHarmony. Users, one supposes, can choose whether to plan hookups or nuptials, though the objectifications and romantic aspirations are always awkwardly juxtaposed.

Case in point (and also Lulu’s most fascinating feature): the #LuluTags. They range from the principled (#RespectsWomen) to the sexually niche (#ThreeDayStuble [sic]) to the utterly sophomoric (#HotFriends). There’s also a high premium placed on smelling good.

On Lulu, the answer to “what women want” is simple: someone fun to make out with who isn’t a total jerk. The only way to win the Lulu ratings game, it seems, is to have a sense of decency. And clothes that aren’t Ed Hardy.

A guitar wouldn’t hurt, either.