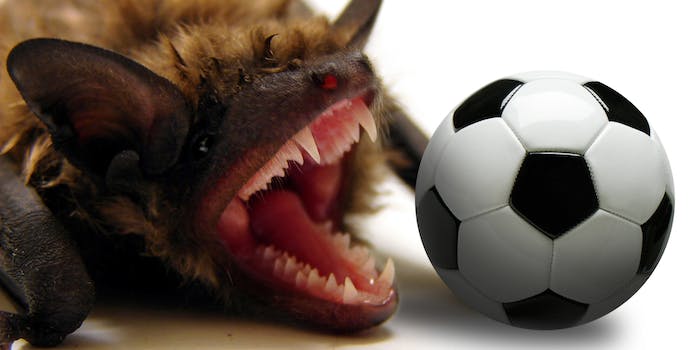 Luis Suarez has some interesting habits.

Luis Suarez is the most dangerous player at the World Cup. And not because he scores goals by the handful.

“It looks like he’s had a little bite of Chiellini,” declared a shocked Stewart Robson, ESPN’s commentator for the match.

Chiellini immediately removed his shirt and made a vain attempt to show bite marks to the referee. No foul was called.

This would mark the third biting incident for the 27-year-old Uruguayan. In April 2013 while playing for Liverpool, Suarez bit Branislav Ivanovic of Chelsea. He was banned 10 games for the incident, though likewise not penalized in-game. In November 2010, while with Dutch club Ajax, Suarez bit Otman Bakkal of PSV Eindhoven, also on the shoulder. He was suspended for seven games. Here’s a mixtape of Suarez’s greatest bites.

Nor is it Suarez’s first flirtation with controversy at the World Cup. In Uruguay’s 2010 World Cup quarterfinal against Ghana, Suarez used his hands to block what would have been a game-winning goal for the Africans in the last minute of extra time. Ghana’s Asamoah Gyan missed the ensuing penalty, and the team would go on to lose to Uruguay on penalty kicks.

It’s hard to imagine Suarez avoiding a suspension and suiting up in Uruguay’s knockout stage game against the Group C winner, likely Colombia.

For his part, Chiellini was instantly outspoken postgame.

“It was ridiculous not to send Suarez off,” Chiellini told Rai TV. “It is clear, clear-cut and then there was the obvious dive afterwards because he knew very well that he did something that he shouldn’t have done.”

Photo via FurryScaly (CC BY SA 2.0) | remix by Jason Reed