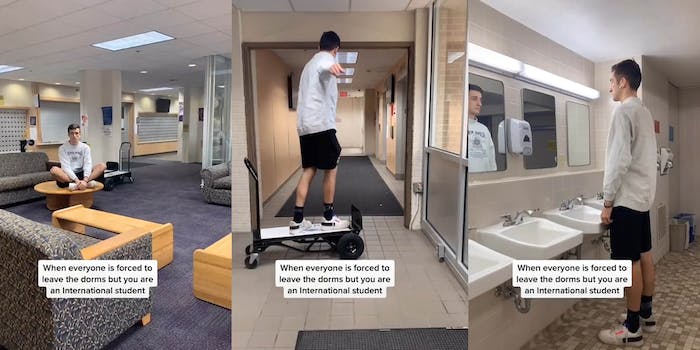 The college freshman is turning his campus quarantine into TikTok gold.

The coronavirus pandemic and ensuing quarantine have ravaged many people’s physical and mental health. But there’s one group who might be weathering this storm slightly better than the rest: TikTokers.

As they’re stuck inside their homes or temporary residences, users of the short-form video app have nothing but free time to perfect their craft and earn a shot at going viral. Luca Petrogalli has accomplished exactly that, turning his quarantine into tragicomic gold.

Petrogalli is a 19-year-old freshman at the University of Wisconsin-Whitewater. The 10,000-plus campus suspended all classes and went on lockdown last month, but Petrogalli remained in his Wells Hall dorm room. For the native Italian, whose family lives near the northern city of Turin, going home wasn’t an option.

Rather than wallow in self-pity, Petrogalli has made the most of his isolation by utilizing the newly vacant Wells Hall for a series of viral TikTok videos. He downloaded the app in December and made a series of videos about the culture shock of being an Italian navigating the midwestern United States.

Those videos have done impressive numbers, accumulating tens—and sometimes hundreds—of thousands of views. But it wasn’t until quarantine that Petrogalli truly hit his stride.

Petrogalli recently posted a TikTok documenting his experience as an international student who is forced to stay on a shut-down college campus. The elegantly simple video, soundtracked by Santo & Johnny’s aching instrumental ballad “Sleepwalk,” shows Petrogalli lounging in the Wells Hall common area, riding a moving cart through the halls, and looking mournfully at his reflection in the public bathroom mirror. The brief, wordless video has accumulated more than 761,000 views, and Petrogalli recently told Forbes that many of his friends found out about the clip through their “For You” page rather than from him directly.

Since his quarantine TikTok exploded in popularity, Petrogalli has posted close to a dozen more clips. The direct sequel earned over 350,000 views, while another clip about the spookiness of walking the dorms alone at night has surpassed 300,000.

Surely this situation would be immensely taxing on anybody, especially a teenager rounding out what was supposed to be a liberating first year of college. Petrogalli pokes fun at his own quarantine-induced anguish in another video that finds him parodying The Fresh Prince of Bel-Air theme.

Still, the 19-year-old seems to be taking his involuntary isolation in stride, and he’s likely using his free time more effectively than most of his peers. Petrogalli can at least take solace in the fact that when classes are finally back in session, he’s going to be a celebrity among his fellow classmates, and the king of Wells Hall.