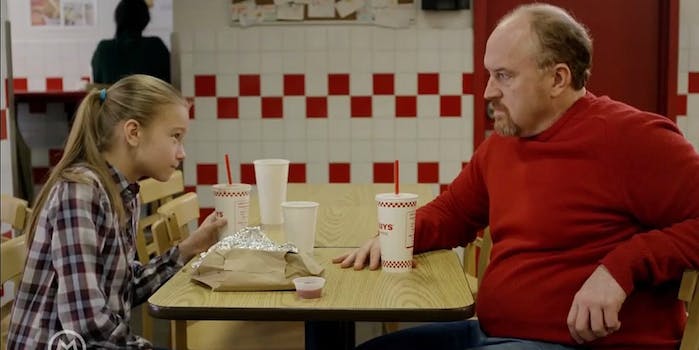 Louis C.K.’s TV daughter roasts him like a pro

Hadley Delaney certainly gets her humor gene from her TV dad.

One of the best parts of Louis C.K.‘s TV show is the relationship he fosters with his two daughters, Lilly (played by Hadley Delaney) and Jane (played by Ursula Parker). The two young actresses are fantastic on the show, and the chemistry they have with the comedic star and each other is one reason Louie has been so good for its five-season run.

And Delaney shows some of her comedic talent in the video below in which she roasts her TV dad for Father’s Day.

A few of my favorite lines from Delaney.

“He taught me you can still be a success in life even if you compulsively do the wrong thing in literally every social situation. And he taught me the most important rule of all—never, ever get fat.”

“I don’t know how you’re still single on the show. You’re a smart, loving, down-to-earth guy. If the women of New York can’t see that, it’s probably because nobody wants to risk having ginger kids. Or because you dress like a homeless Seinfeld.”

“What other dad would catch their daughter smoking pot and then take her out for a burger? That’s, like, an irresponsible level of cool.”

H/T Slate | Screengrab via Made Men/YouTube