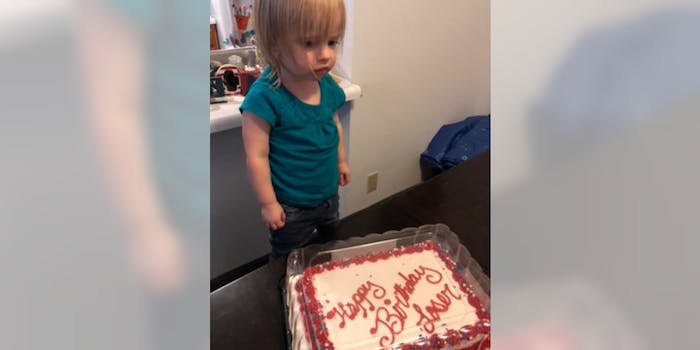 'The picture of my daughter looking at the cake kills me every time.'

In life, there are winners and losers.

One 2-year-old was forced to learn that lesson a little too early after her mom mistakenly brought home a cake for her birthday that wished her a “Happy Birthday Loser” in September.

The child’s mom, Melin Jones, posted a photo of the very disappointed toddler in the Sad Sales Facebook group, along with a caption detailing how the loser cake mishap happened.

“My daughter’s name is Elizabeth, we call her Liz and her nickname is Lizard,” she wrote, “I told the lady to write ‘Happy Birthday Lizard.'”

Without looking at the cake, Jones popped it in her cart and took it home. She looked at the cake when she got home, and to her surprise, it was decorated with “loser” instead of her daughter’s nickname.

“I was a little shocked, but after a few seconds, I couldn’t stop laughing,” Jones told People. “I had no clue they got it wrong. I was in a hurry and it seemed like a simple enough request. I wasn’t really expecting anything to be wrong with it.”

Jones assumed the cake decorator misheard her but admitted that she should have looked at the cake prior to leaving the store. Jones said she was “pissed” at first but now thinks it’s funny.

“The picture of my daughter looking at the cake kills me every time,” Jones wrote.

Jones ended up being both the loser and the winner because she bought her daughter a whole new cake and kept the loser cake all for herself.

“I ate every bit of that loser cake,” Jones wrote.