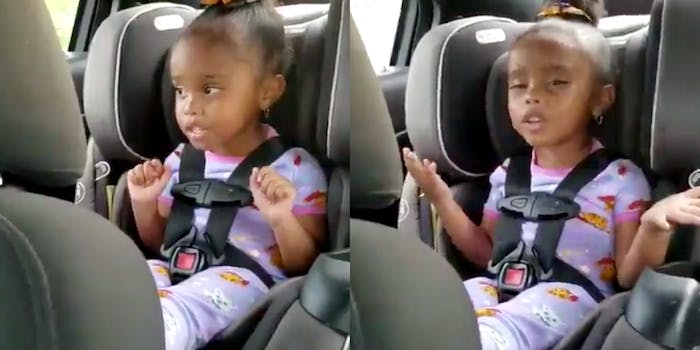 This election stuff is a lot more complicated than pizza versus burgers.

Six months ago, diagnosing the series of events that led to the surprising results of the 2016 presidential election put many Americans in a confused state of mind. Why did President Barack Obama have to leave? And why was Democratic presidential candidate Hillary Clinton the loser? And what was then-President-elect Donald Trump going to do once he took office?

In fact, quite a few dissenters sounded exactly like this inquisitive child who just wants to know what the heck this whole presidential process is all about. Don’t let the appearance of the 4-to-5-year-old child in this video, posted by TheShadeRoom, fool you: She’s asking the hard-hitting questions. And, let’s be honest, at this point in Trump’s presidency, how would we even answer them?

“So how come Hillary did not get to be the president, and why is she the loser? And what are they even supposed to be winning?” she fires off again after her mother, presumably the woman filming the video, begins answering. “But how do they get to [be the president] and how do they win?”

Yeah, these are some pretty basic questions to answer: Presidents can only serve two terms, so Obama’s vacationing with Michelle, and Clinton contributed her loss to WikiLeaks, Russian interference, the timing of the FBI’s disclosure about its investigation her email servers, and her own shortcomings.

Her mom tries to explain to her that the election is a lot like the mock voting process she and her classmates participated in by voting between two cookies. Well, sort of.

If only real elections were just as simple.