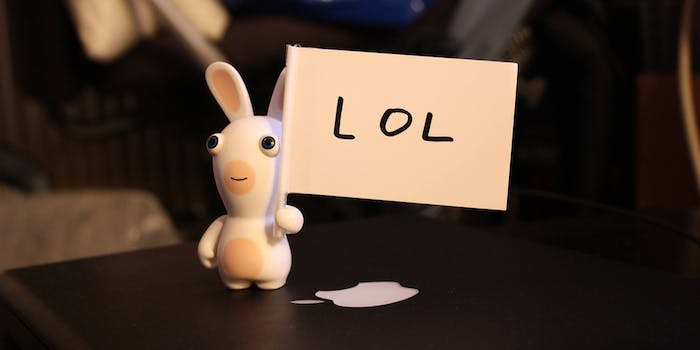 A eulogy for LOL

Facebook knows how we laugh, and English speakers no longer 'LOL.'

Good night, sweet LOL leetspeak, for you have apparently left our lexicon as people have turned to “hahas” and “hehes” to express laughter and happiness online. Facebook was responsible for cluing us in to your sudden obscurity, when a study demonstrated how people laugh on the social network.

It could be that the last week in May was just devoid of laughing out loud—the week when Facebook analyzed English posts anonymously to figure out which forms of “e-laughing,” are the most popular. The company discovered versions of “haha” accounted for 51.4 percent of e-laughing, emoji represented 33.7 percent, and “hehe” made up 13.1 percent of laughter that week.

You, once-stalwart LOL, appeared just 1.9 percent of the time.

I remember when LOL was literally all I texted friends. At the height of the Myspace and AIM days, we sent each other those three little characters, and had to explain to moms and dads that it did not mean “lots of love.” Even when I wasn’t really laughing out loud, I used the phrase anyway—now it’s not even used to identify humorous moments, but as an acknowledgement or an “um”-esque filler word: “I feel like garbage today lol.”

In 2012, linguist and political commentator John McWhorter described the evolution of LOL.

It’s a marker of empathy. It’s a marker of accommodation. We linguists call things like that pragmatic particles. Any spoken language that’s used by real people has them. If you happen to speak Japanese, think about that little word “ne” that you use at the end of a lot of sentences. If you listen to the way black youth today speak, think about the use of the word “yo.” Whole dissertations could be written about it and probably are being written about it. A pragmatic particle, that’s what LOL has gradually become. It’s a way of using the language between actual people. [emphasis added]

LOL, you existed before smartphones and texting—your origin dates back to at least 1989, when LOL appeared in a “FidoNews” newsletter encouraging “colorful communicating.” But Wayne Pearson also takes credit for your birth in an undated post, explaining how he first typed LOL on a Canadian bulletin board system (BBS) sometime in the early-to-mid 1980s.

Either way, you, like the rest of us millennials, grew up as technology did. And as you evolved, so too did your use. The Daily Dot’s Miles Klee wrote the definitive guide for laughing out loud, which includes every possible scenario during which someone might laugh and be heard.

It wasn’t until 2011 that you were added to the dictionary—apparently the editors at the Oxford English Dictionary finally deemed the words born in the era of the Internet worthy enough to be included with those that existed when we only had paper and pens to send messages.

But it seems you’ve been replaced. Emojis represent true laughing out loud—thank you face with tears of joy emoji—at least on Facebook. Data scientists found that the average age of emoji users is younger than the average “haha,” user, and both of those are younger than people who “LOL.”

To commemorate your quite measly existence, we’ve written an obituary. Perhaps your time has come.

Laughing out loud “LOL” died unexpectedly online on August 9, in Menlo Park, California, at the age of 26 (estimated.)

LOL is survived by relatives laughing emoji, WTF, NSFW, and bae. LOL is preceded in death by AFK, Myspace, and Orkut.

LOL was born in 1989 (estimated) on the Internet to a newsletter called FidoNews, or a man called Wayne Pearson. It graduated from high school when the rest of us millennials did, and may or may not have dropped out of college to move back in with parents.

LOL was accomplished at letting a conversation die unexpectedly when a correspondent did not know how to properly end the conversation, and also served as a simple and mysterious Away Message. LOL was a happy individual who loved SMS and was regularly seen attending social networking groups and message boards.

A funeral is not scheduled at this time, but we encourage anyone to send his or her condolences via Snapchat.