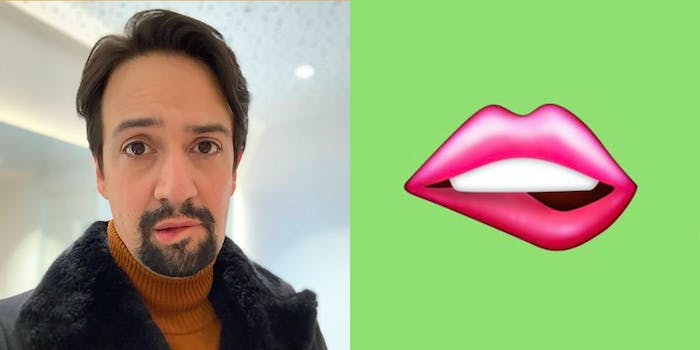 The new lip-biting emoji is bringing back an old meme

The lip-biting is back.

The latest emoji update was unveiled earlier today, giving us a look at all of the faces, people, hands, and items we’ll soon be able to use on our smartphones later this year. But one of them is already resurfacing a meme that swept TikTok nearly a year ago.

But for some, that’s not the immediate connection they made with the new lip-biting emoji. Instead, it was a years-old image of Lin-Manuel Miranda doing something similar.

To understand why people are making the connection between Miranda and lip-biting, we’ll have to go back to last summer when TikTok focused on Miranda’s tendency to bite his lip in selfies. On Nov. 12, 2018, Miranda posted a thread of what a fitting for Hamilton looked like after he decided to reprise the role for several performances of Hamilton in Puerto Rico. The final photo in the thread was a selfie of Miranda in one of his Hamilton costumes—and featured him biting his lip. He posted another lip-biting selfie a month later.

In July 2020, Miranda’s selfies turned into a meme thanks to TikTok in part thanks to TikToker @okayelisabeth, who posted a photo roll featuring nothing but Miranda’s lip-biting selfie before those photos overtook her phone; she even recently celebrated the TikTok’s anniversary.

From there, it led to several TikToks that showcased just how much of a presence Miranda could have. It was one of those memes that showed while Miranda was hugely popular for creating In the Heights and Hamilton as well as his social media presence, Gen Z wasn’t as enthused.

At the time, even Miranda acknowledged TikTok’s fixation on him with a freestyle rap that probably made some of them cringe even more.

For now, as we all get used to the newest set of emoji, the lip bite will continue to haunt us all.