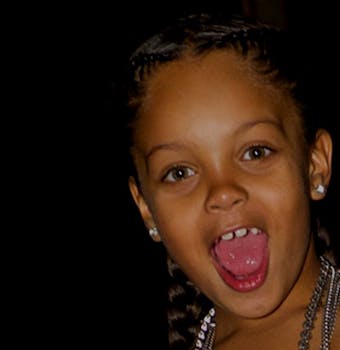 Lil Poopy's pappy has been cleared of spawning all that slapping.

Lil Poopy’s pappy has been cleared of spawning all that slapping.

The beleaguered father, Massachusetts native Luis Rivera, had been the subject of a state-officiated investigation for the past six weeks, after his son, 9-year-old rapper Lil Poopy, who’s found moderate success as a novelty act alongside such rappers as Waka Flocka Flame and French Montana, was first found to be slapping adult women on the derriere in a since-deleted YouTube video.

Police alerted the Department of Children and Families of the raunchy activity on Feb. 26, after receiving a phone call from Poopy’s neighbors, who’d seen the video, titled “Lil Poopy Gettin it in.”

YouTube age-restrictied the video a few days later (the site deleted Poopy’s “Gettin it in” two days after that) and began looking into allegations that Rivera’s parental negligence was the cause for Poopy’s behavior.

On Friday, a spokeswoman for the state Department of Children and Families noted announced that the case had been closed and all charges had been dropped.

“They knew this was going to be the outcome,” he said. “They were just a little annoyed the government got involved to the extend that it did.”

Poopy celebrated the decision by retweeting a series of his attorney Joseph Krowski Jr.’s most streetwise tweets before writing that he’d “rather swim with the sharks than run with the rats.”

That claim doesn’t actually mean anything, but hey, Poopy’s nine—and his dad’s a free man.