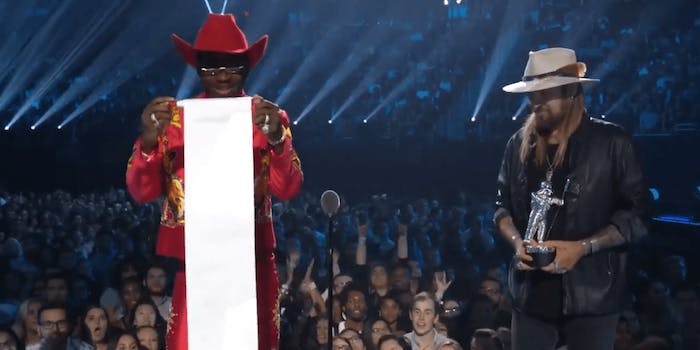 Lil Nas X unfurls a new meme at the VMAs

Last night, Lil Nas X won what he said was his first-ever award. He and Billy Ray Cyrus won Song of the Year at the VMAs for their remix of Nas’ crossover hit “Old Town Road”. The pair appeared on stage together to accept the award with Nas already turning heads in his bright red cowboy suit. After thanking Cyrus, Nas announced he had “a little speech” and proceeded to take out a scroll that was long enough to hit the floor with an audible thud when it was unraveled.

Lizzo’s reaction said it all.

Nas didn’t actually end up reading from the scroll, and in fact, it looked as if it was just blank paper. Cyrus then took over to give a more standard acceptance speech, thanking God and the fans.

Much like everything else Lil Nas X does, the scroll moment instantly became a meme.

Me when someone asks what I did this weekend: @LilNasX #VMAs @vmas #MTVVMAs pic.twitter.com/SWjVeBt1SE

me getting ready to explain why i don't deserve happiness:pic.twitter.com/CtSJE2eqD9

When anyone asks me to show them the receipts: @LilNasX #VMAs pic.twitter.com/FWJN5IuAe8

Nas not only had a big win last night, he also had a big performance. After satirizing his own song with a video showing a future where he’s president in the year 2079 and the world is celebrating the 3,162nd remix of “Old Town Road,” Nas launched into the song “Panini” complete with futuristic outfits and visual effects.