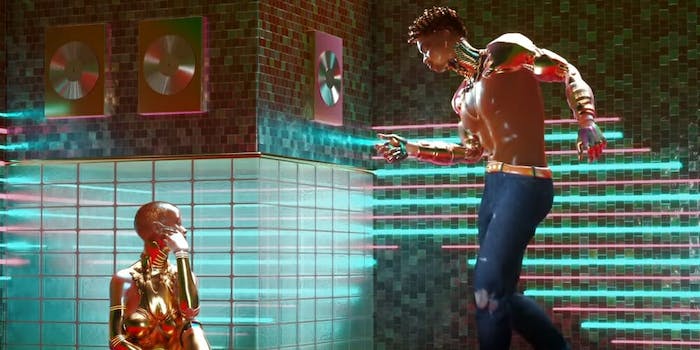 Viral sensation Lil Nas X just released his first track since “Old Town Road,” the song that blew up the internet and his career. The new bob is called “Panini”–and, no, it isn’t about a sandwich. But, yes, it did cook up a fresh batch of memes.

With a hook like, “Hey panini, don’t you be a meanie,” how could it not?

The video for “Panini” has already surpassed 1 million views on YouTube. Unlike the country twang of “Old Town Road,” “Panini” sounds much more like a traditional rap song. Its video also trades in cowboy hats and sepia tones for the complete opposite: animated robots covered in shiny gloss.

panini is not about a sandwich pic.twitter.com/e5HMDIsVVO

Lil Nas also gave a special shout out to Frances Bean Cobain, daughter of the late Nirvana frontman Kurt Cobain. This is because “Panini” interpolates Nirvana’s “In Bloom.” The late singer is even listed as one of “Panini’s” writers.

Country music legend Billy Ray Cyrus, a collaborator on the “Old Town Road” remix, even had to get his congratulations in.

Congrats on your new song @LilNasX! Love #Panini and can't wait for your EP to drop tonight! Crank it up y'all https://t.co/G6i1asQ8cM pic.twitter.com/zHtIhyH2fl

.@LilNasX and @take_a_daytrip walking out of the studio after making Panini pic.twitter.com/QZ5way4RHE

Many fans repeated the same sentiment: Now that Lil Nas has two fire singles out, haters can stop calling him a one hit wonder.

Rest in peace to anyone looking for information on actual paninis after his song dropped, though.

The country star and rapper is now trying to collaborate with celebrity chef Gordon Ramsey. Who knows, his last attempt at garnering a legendary collab through Twitter went wildly successful.

tryna get gordon ramsay on this panini remix