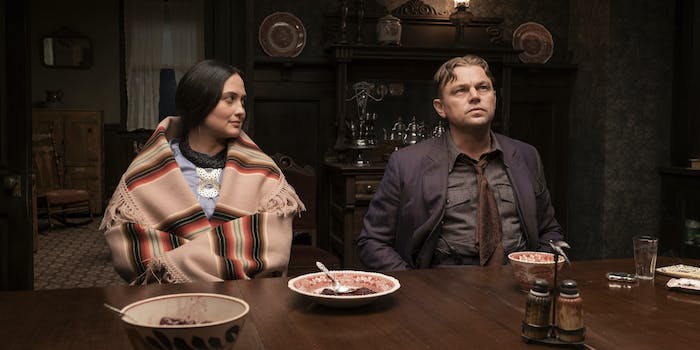 Killers of the Flower Moon/Apple Studios

He is anything but 'unrecognizable.'

The first look at Killers of the Flower Moon—Martin Scorsese’s next film with an all-star cast including Leonardo DiCaprio, Lily Gladstone, Jesse Plemons, and Robert DeNiro—is here, and the question of DiCaprio’s recognizability has turned into a meme.

On Monday, Osage News debuted the first photo from the film, which is shooting in Osage County, Oklahoma. (Vanity Fair also had the photo.) It features Gladstone and DiCaprio, who portray Mollie Burkhart and Ernest Burhart, respectively, sitting at a table for a meal. Gladstone is looking at someone just out of the frame while DiCaprio is looking up at something.

The photo immediately went viral as other news outlets began to write up posts about the photo. The Killers of the Flower Moon photo is a perfect storm given that the film is based on a well-regarded book, it’s Scorsese’s first film since The Irishman (and just about anything Scorsese works on has buzz around it), and it features DiCaprio—one of the world’s most famous stars—in it. It can also take some ingenuity to get people to click on an article about a photo that is already being shared widely on social media; sometimes it means teasing a detail.

Other times, it might mean highlighting how much an actor does or doesn’t look like themselves. In the case of the New York Post, it meant noting how “unrecognizable” DiCaprio looked in the photo.

What did that mean? If you click the article and read it, it mostly means that DiCaprio doesn’t look like he does in some of his more famous roles in which he’s dressed in clothes that fit him immaculately or made to appear as attractive as possible.

“In the first look, fans see a notably plain-looking DiCaprio, 46, seated aside Gladstone, 34, lit starkly in a dining room,” the article states. But chances are many of the people who are seeing the Post’s post on Twitter aren’t clicking through to the article.

People are only seeing a tweet claiming that DiCaprio is unrecognizable and immediately recognizing DiCaprio, making the Post’s claim absurd. Sure, it might be a DiCaprio with a bad haircut, bags under his eyes, sallow skin, and a suit that isn’t as tailored as usual. There’s also no mistaking DiCaprio for anyone else in that photo. It’s basically the inverse of Hollywood Life’s assertion that Nicole Kidman was “the spitting image of Lucille Ball” while filming Being the Ricardos when photos immediately proved that Kidman was not the spitting image of Lucille Ball.

The end result is the same: It’s an absurd claim that will absolutely get memed. And sure enough, it did.

Some ran with the idea that if DiCaprio was so unrecognizable, he was actually playing Gladstone’s character.

Others used Matt Damon’s upcoming movie Stillwater—and the connection between co-stars Damon and DiCaprio in The Departed—to insinuate that DiCaprio is actually Damon now.

Then you have Photoshops placed on DiCaprio’s face to actually make him unrecognizable.

There are photos that are finding an unrecognizable DiCaprio in unexpected places or using other characters and actors to make the same point as the Post tweet.

And then some are leaning into DiCaprio’s catalog, including a scene from Once Upon a Time in Hollywood where DiCaprio’s character tested for Steve McQueen’s role in The Great Escape.

But at least Gladstone seemed to find it amusing.

Killers of the Flower Moon launched production in April 2021 with no release date attached.