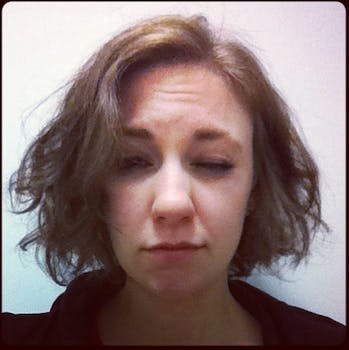 Lena Dunham has apologized for wearing a fake hijab and making a joke about "fundamentalists" after many on Twitter called her ignorant and racist.

New Yorker spokespuppet and voice of someone’s generation Lena Dunham is apologizing for a tweet that some users deemed offensive.

Dunham caught flak Thursday for tweeting out picture of herself wearing a mock Muslim veil, which prompted outrage from some Twitter users.

The Girls creator released a picture of herself wearing a black scarf modeled in the style of a hijab with a message saying “I had a real goth/fundamentalist attitude when I woke up from my nap.”

She has since deleted the message and tweeted an apology. “Didn’t realize what a bad time it was to make a joke like that,” Dunham wrote.

Twitter user Ayesha Siddiqi joined in on the chorus of tweets slamming Dunham by calling the star’s tweet “ignorant/racist.” She added that it’s “never a good time to ‘play ethnic,’ regardless of ongoing violence against the people you’re making fun of @lenadunham.” (Dunham thanked Siddiqi on Friday by saying she scolded her in a  “hard and smart” manner.)

Other users echoed Siddiqi’s thoughts, including Sanaa Qureshi, who tweeted that Dunham is “just another racist white girl that people think is hilarious. this world.”

But some people did come to Dunham’s defense and tweeted that her tweet was not racist: “Race & religion are two separate things. What she did wasn’t racist in the slightest. Leave @lenadunham alone,” tweeted Brett Owen.

This isn’t the first time the Tiny Furniture writer has been embroiled in a racism problem. When Girls premiered, many critics lambasted the show for its lack of diversity, something Dunham says will be fixed in season 2.

Dunham is currently taping season two of her HBO comedy, so we imagine she’s doing a lot of deep thinking at Cafe Grumpy today.