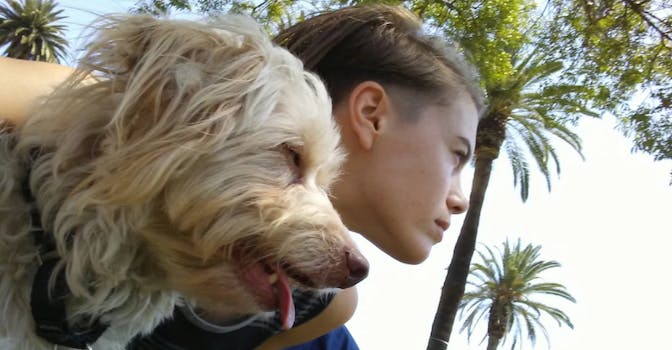 Thursday night, the internet was set asunder by a Yahoo Celebrity profile that accused Lena Dunham of lying about her dog’s provenance, claiming her beloved pup Lamby wasn’t abused the way that Lena said it was. The story arose from an Instagram by the Girls star, where she announced that she had given up Lamby because of his behavioral problems.

The Brooklyn Animal Resource Coalition (BARC), where Lena adopted Lamby, disputed her claims of multiple previous owners and abuse, calling into question her intentions in adopting the dog and her subsequent decision to later give him away.

“It’s just hard to believe the dog was nasty when she took Lamby to every green room with her when Girls was still a thing 4 years ago,” a BARC representative told Yahoo.

The story spiraled out of control in the way only things about Lena Dunham can, as she posted another Instagram blaming Lamby for his problems.

It's come to my attention that the staff at the shelter where I adopted Lamby have a very different account of his early life and behavioral issues than I do. While I'm sorry to have disappointed them, I can't apologize. Lamby was and is one of the great loves of my life. When I met him I knew we'd have an amazing journey. But his aggression – which was unpredictable- and his particular issues, which remain myriad, weren't manageable, at least not by me. I did what I thought the best mother would do, which was to give him a life that provided for his specific needs. He'd been with me for nearly four years and I was his mom- I was in the best position to discern what those needs were. After countless hours of training, endless financial support and a lot of tears he was given access to a better life. I still support him financially and I'll always be there for him in every way but he's notably happier in his new surroundings. Why should this story be subject to scrutiny and anger? It is willfully misunderstanding the truth. I hope those judging can imagine the incredible pain of letting go of your favorite creature on EARTH because you know you can't help them be healthy and happy. I would never say an unkind word about the staff of BARC, what they do is amazing and life saving for these animals- but we have different accounts of Lamby's behavior and they were not present in my home nor did they live with him for an extended period. They did not witness the consistent and responsible care I provided. I have weathered a lot of micro-scandals but this one hurts MOST, because of the vulnerability of letting people know Lamby and my story, and because I miss him so damn much. This is the painting that greets me every day when I walk into my home. This is the animal who taught me about loving and letting go. I know I'm a lot of fun to place your issues on, but I won't let anyone hang their hat on this peg. Not this time.

People began to question her fitness to own a dog—she adopted two puppies earlier this year that she still (probably?) owns—and her moral compass, saying no one should ever give a dog away. Especially not one you’ve had for four years.

But the Daily Dot spoke with the two people involved in Lamby’s rehoming and found a different tale.

Matt Beisner of THE ZEN DOG, a dog boarding and training facility in Los Angeles, facilitated Lamby’s adoption to a new owner and found myriad issues with the way the story was told.

According to Beisner, Dunham had been working with ZEN for more than a year. Prior to that, she’d used the company’s boarding facilities. Beisner said he got to know Lamby when, depending on Dunham’s schedule, the company would care for him. It was sometime last year when Lena approached him about correcting Lamby’s bad behavior.

“I got a chance to do a private session with her and Jack [Antonoff] and Lamby at some point last year. … I helped her implement changes in the home. She was really active in keeping in touch with us and wanting to know about his progress.”

Between the two of them, they tried to find a way for, per Beisner, “Lamby to succeed.” As Dunham mentioned in her subsequent Instagram, Lamby had many issues, which Beisner backed up. Lamby didn’t tolerate—“on a chemical plane,” as Beisner put it—stress, adrenaline, or excitement very well, lashing out and biting. Despite changes made in the home to help Lamby, including a better spot for his crate, not enough progress was being made to curb his behavior. Beisner was adamant Dunham was putting in all the effort she could.

“If one is making an effort, four years and several trainers, they’ve at least given it a try,” Beisner said. “My experience with Lena was a sincere, well-intentioned, compassionate owner, who was in a bind … regardless of how much she loved him.”

Unable to curb Lamby’s aggression and with a schedule that left her away from the dog for months at a time, which Beisner said may have aided in the problem, the trainer brought up rehoming. “[We] began a conversation which is, ‘Is this realistic for you?’” Beisner said. “If we rehabilitate him, knowing what his triggers are, based on your lifestyle, does it seem realistic that this is going to be best for him?”

Beisner said they talked multiple times about this possibility—it’s a conversation he said he’s had with many owners—and that, in the end, Dunham “really wanted to do the right thing for her dog.”

Around this time, Dani Shay, an employee at THE ZEN DOG took an interest in Lamby, as she “bonded with him on several training walks.” She said, according to Beisner, “You know, if Lena’s ever looking to rehome Lamby, I’d be interested.”

Beisner put the two in touch to have a discussion about Shay possibly taking Lamby.

“Since Lamby came with evident behavioral challenges, we approached things slowly and carefully,” Shay told the Daily Dot. “Dunham checked in every step of the way, and we kept her fully informed. Matt and my co-workers were very supportive throughout the process.”

It’s a decision both say didn’t come lightly for Dunham, despite the flippancy the internet may have portrayed it with.

“Rehoming a beloved pet is a difficult and painful thing to do, and people have to make that decision all the time, for various reasons,” Shay said. But Dunham did everything right in her mind.

“When it came time for us to take the next step and I adopted Lamby from Lena officially, we did so in a way that would ensure all his particular needs would be met,” said Shay. “As Lena mentioned, she contributes to his life financially (providing excellent food, healthcare, etc), and I provide my time, energy, training, and daily care. Together, we are able to give Lamby all the love and support he needs, and I would not be able to do it without her!”

Apparently, Lamby is doing great now. Beisner saw him the other day, and Shay insists he’s been as good as possible.

“Lamby is living a great life and has shown tremendous progress,” she said. “He still needs gentle reminders but has become increasingly receptive to direction. He is happy and well, which is what’s really important.”

Beisner was adamant that while this wasn’t Lamby’s fault (how could it be?) and that while the shelter probably wasn’t lying in its assessment of Lamby, he saw the same problems Dunham struggled with.

“I feel for both sides. I think [BARC] was right up to the extent that they could see, and what I know from experience, dogs go through a thawing out period, and what they see at the rescue [may not match up],” Beisner said. “But by 10 weeks old the dog is set neurologically, and we know without a doubt Lamby didn’t get what he needed in those formative weeks. At the very least it was neglect. Whether or not it’s abuse is not for me to say, but he displayed behavior that’s very consistent with dogs that are quite loving but undersocialized and developmentally not all there.”

Both Beisner and Shay were baffled by the media imbroglio that unfolded after the story broke.

“It genuinely hurts my feelings to see what people are saying about Lena, not knowing all that she has done and continues to do for Lamby. She loves him so much and is still in touch, wanting to be sure he’s doing well,” Shay said.

Beisner’s just upset we all lost focus of what truly matters in life: the dogs.

“What I think is frankly a gross misuse of intention and energy is focusing on the personality of this particular owner as opposed to the principle of how do we help dogs,” he said. “If we had taken all of the press and all of the attention over the last week and had a national or international effort to learn about how to help dogs we would have had a real dent, but as a result of the shit storm, we haven’t helped a single dog.”