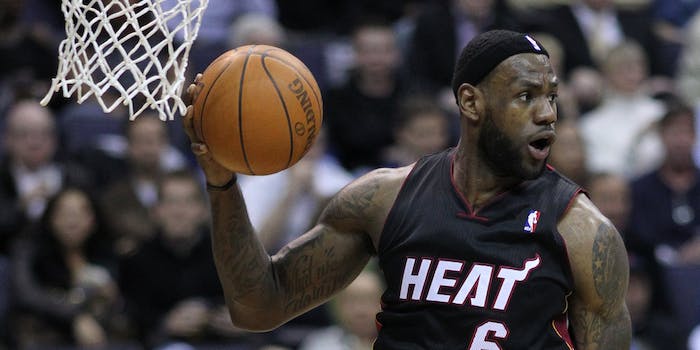 James also smashed his own personal record of 56 points. He went on to score five more, walking off the court to a standing ovation.

The NBA has already packaged every field goal in an easy-to-digest video for us to watch his epic night on repeat:

People on Twitter could hardly contain themselves as they watched what might be the best night of James’s career.

It’s ok LeBron, you only impregnated 95% of Miami last night.

It became apparent to fans that James was not just a mere mortal like the rest of us.

When I made Lebron James I was in the zone.

25 points in the third quarter tho. LeBron James is not human. pic.twitter.com/o9IZkbJokr

If you’ve eliminated all other possibilities, it’s probably the Illuminati.

THIS IS THE ONLY EXPLANATION FOR LEBRON JAMES SCORING 61 POINTS IN ONE GAME. pic.twitter.com/p6XtpYGfmr

Even sports pundits were impressed.

Crazy: None of LeBron’s 61 points came via dunk last night. Didn’t dunk in a game for the first time since January.

At least Bobcats fans had something to look forward to the next day.

So this lebron guy is kinda good huh?