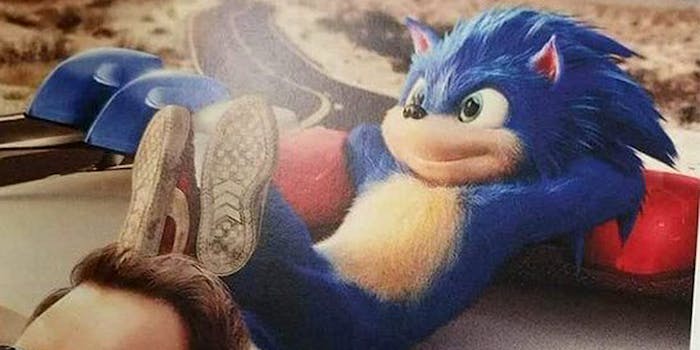 Earlier this week, we saw the first glimpse of the 2019 live-action Sonic the Hedgehog movie in a teaser poster that showed a silhouette of the titular character. That silhouette prompted a lot of debate (and memes) among Sonic fans who were unsure about the Sega character’s new, muscular appearance. Now a couple of alleged old Sonic the Hedgehog poster designs that were leaked online are adding to the discourse.

The below poster shows Sonic relaxing on the roof of a police car with a human officer (who looks like Chris Pratt). “Fast. Friends.” the tagline reads.

People on Twitter seem to agree that this design of Sonic seems improved from the silhouette:

WHAT??
So apparently this poster is from last year when they greenlit the cast and script. But looks like things with the cast changed. I don’t know if this info is true, but if this is what Sonic looks like, its better than what I expected! Source of the photo: @Farrisken210 pic.twitter.com/vaBkPcb5Xm

Overall Thoughts: The shadow and legs teasers were extremely unflattering. If this is the overall final design, it could have been a lot worse. But I still need to see a trailer too. pic.twitter.com/1e9bhsZ7JK

Yet another leaked alleged poster shows Sonic’s furry blue legs dangling over the Golden Gate Bridge in San Francisco. (It looks like a thirst trap photo on Instagram.)

Apparently this is another poster for the 'Sonic the Hedgehog' movie?

That poster has turned into a meme in which people try to copy the leg placement.

I just couldn’t get my thigh out of the shot, I couldn’t pic.twitter.com/QSKGrBpXoS

I figured it out you just gotta sit leaning back not fully laying down. pic.twitter.com/r9XPpbLwRR

People are also making memes about the news of leaked Sonic the Hedgehog posters.

According to toe IMBd, the film stars Jim Carrey, James Marsden, and is directed by Jeff Fowler. Parks and Recreation‘s Ben Schwartz voices the titular hedgehog.

Based on the differing production images, it’s unclear what the final version of Sonic will actually look like in the movie. One thing seems obvious, though: Sonic’s furry legs will get a lot of screen time.