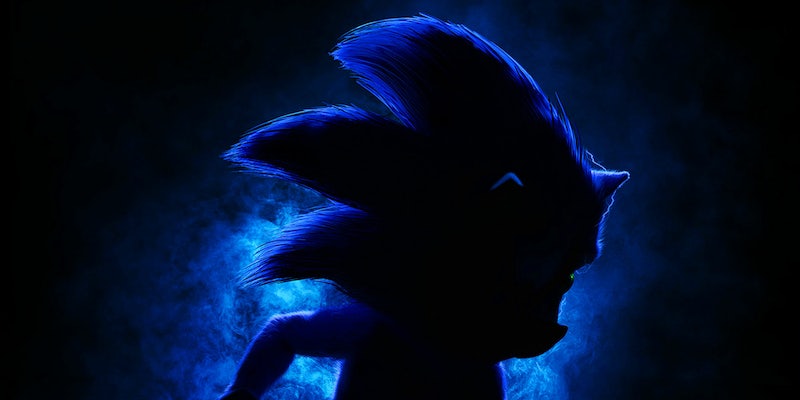 Gotta go fast and far away from this nightmare fuel.

Last month, we saw realistic (and somewhat terrifying) versions of our favorite animated Pokémon characters in the trailer for the upcoming Detective Pikachu film. Now we’re about to find out what Sonic the Hedgehog will look like in a new live-action film.

IGN revealed the first look at the 2019 Sonic the Hedgehog film today. There isn’t much to see—just a poster with a silhouette of the Sega character ready to sprint into action—but it was enough to spark jokes and memes.

Take a look at the brand new motion poster for Sonic The Hedgehog right here! pic.twitter.com/15n5APqaM0

Those familiar with Sonic’s overall look might notice some subtle, offputting differences between the video game character and the version that appears in the poster, including a surprisingly toned musculature and a face that looks a bit angular.

Fans were quick to point out these differences.

i cant wait to see how fucking horrible this movie will be pic.twitter.com/yTDPGFinUS

Finally he gets his time to shine pic.twitter.com/fj7zC3iStL

WHERE ARE THE BIG GLOVES pic.twitter.com/9KJQOQZHqP

For some fans, it’s all about Sonic’s body shape. Like a lot of cartoon or video game characters, many of Sonic’s features are exaggerated or minimized in order to accentuate certain aspects of his body and attitude.

sonic the hedgehog should not have perceptible musculature. i'll die on this hillhttps://t.co/P6YvOHLRB8

…why is everything but his head proportioned like a human wearing a Sonic costume (look at the arm and leg muscles and body shape!) when he's going to be animated? pic.twitter.com/dwP0abgxbU

Of course, plenty of people can’t help but compare this poster to the trailer for Detective Pikachu.

I've worked out who's doing mocap for the Sonic movie. pic.twitter.com/eTu4c6qUOo

Even Japanese fans are being forced to confront Sonic’s weird little body.

There’s also the eyes. In the games and cartoons, Sonic typically has one big eye-hole that bridges over his nose. It’s the kind of silly anime-esque thing you’d expect, but it works, and one imagines it makes it easier to animate his expressions. Judging from the live-action movie poster, though, Sonic’s eyes might be smaller.

The whole eye thing calls to mind the haunted Sonic video game creepypasta from last year, where the hedgehog’s eyes were glazed over with bloodlust.

Even in IGN’s first look at the movie, executive producer Tim Miller (who also directed Deadpool) said the eyes were one of the hardest things to nail down.

“I don’t think SEGA was entirely happy with the eye decision, but these sorts of things you go, ‘It’s going to look weird if we don’t do this.’ But everything is a discussion, and that’s kind of the goal, which is to only change what’s necessary and stay true to the rest of it,” Miller said to IGN. “He’s not going to feel like a Pixar character would because I don’t think that’s the right aesthetic to make it feel like part of our world.”

Sonic the Hedgehog hits theaters on November 8, 2019 in the United States, November 28 in Australia, and December 6 in the U.K.