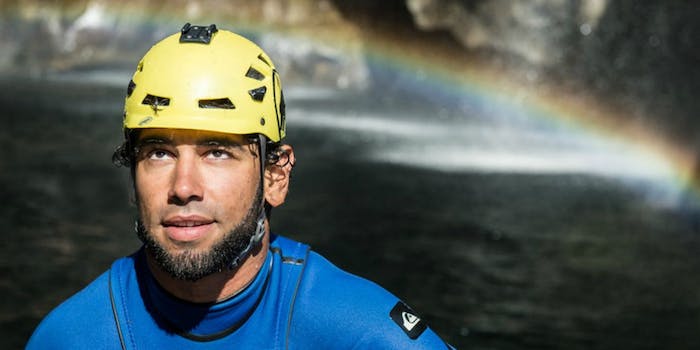 He only suffered slight injuries.

What compels a seemingly rational man to jump off a 193-foot high cliff into a pool of water that’s approximately 26 feet deep? For Laso Schaller, perhaps it was the desire to be known as the world record holder for highest cliff jump. If that’s the case, consider him a huge success.

Jumping in Switzerland from a height of 58.8 meters—slightly taller than the Leaning Tower of Pisa stands, Schaller hit the water at 76.4 mph after free-falling for 3.5 seconds. But he survived, as the video below attests.

The magnitude of this jump required more preparation than your standard take-a-breath-and-go waterfall jump. Under sunny blue skies, Schaller and team first built a platform to give him a clean, controlled exit, with enough projection to clear the rock wall. Secondly, they explored the area with scuba gear – and set six tanks in the pool to aerate the water and soften the landing. Finally, they did a number of rock drops — timing the landing, seeing the fall line. That said, for Laso, it’s almost the same as any old jump. “Once you get above 25m, everything starts to look and feel the same,” he says. “The only difference is the airtime.”

All was not perfect with the jump. Schaller missed the aerated portion of the pool and thus, landed on harder water. Perhaps as a result, Schaller dislocated his hip briefly. But he felt well enough to do this when he emerged from the water. He deserved a little celebration, after all.