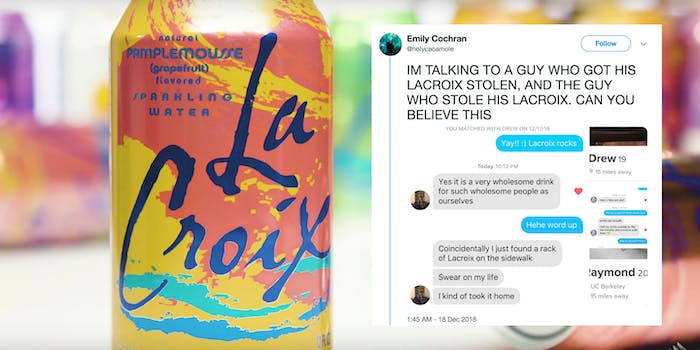 Woman matches on Tinder with LaCroix thief—and his victim

Even on a good day, Tinder can be a weird place to be. In 2018 alone, it’s spawned heart-breaking memes, pit dozens of men against each other for a single lady, and now it’s helped one user catch a LaCroix thief in the act.

The drama went down in a series of Tinder messages that Emily Cochran (@holycacamole) shared on her Twitter Thursday. She bonded with a match over their shared love of the sparkling water, and he described how he’d chanced upon a rack of LaCroix on the sidewalk. He snatched the lot and took it home, as one does.

Not half an hour later, she started talking to another match who said he’d had a bad day. “I left my drinks outside for like two minutes and someone stole them,” he wrote.

Cochran put two and two together. “I was so confused how the two texts could be similar,” she told the Daily Dot. Both men were located the same distance away, and once she confirmed the pilfered drinks were LaCroix, she took to Twitter.

“IM TALKING TO A GUY WHO GOT HIS LACROIX STOLEN, AND THE GUY WHO STOLE HIS LACROIX. CAN YOU BELIEVE THIS,” Cochran tweeted. Her post now sits at over 80,000 likes.

IM TALKING TO A GUY WHO GOT HIS LACROIX STOLEN, AND THE GUY WHO STOLE HIS LACROIX. CAN YOU BELIEVE THIS pic.twitter.com/QaZLQAz82q

Cochran filled the two guys in on the situation, but she wasn’t about to let it end there. “The coincidence was too crazy for me to make up, I had to add them on Snapchat for updates,” she said. The thief immediately expressed remorse and offered to give them back, so she messaged the owner to stay put where he’d left his drinks.

About an hour later, she posted an update: The two had met up, and all was returned. Well, except for the two cans the thief had already guzzled. Call it a finder’s fee? The two shared a LaCroix in Cochran’s honor and sent her a video of the encounter.

UPDATE: THEY FOUND EACH OTHER AND SHARED A LACROIX IN MY HONOR. THEY SOUND LIKE THEY ARE BROS pic.twitter.com/FxWCpEZTUD

“@lacroixwater @tinder me now that I’m famous,” Cochran posted alongside a video of her sipping that good, good sparkling water.

I hope the guys end up together

This love story though… pic.twitter.com/WbVb2VmB4v