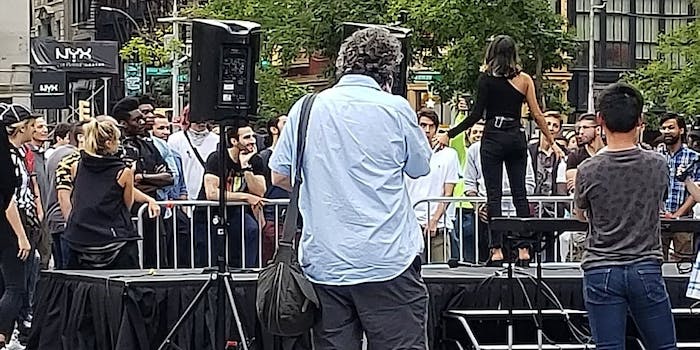 How popular is a woman named Natasha on Tinder? So popular that she reportedly compelled dozens of guys to meet her at New York City’s Union Square at the same time to run them through a competition to determine who would win her affections. Once they found out they had been swindled, some of the deceived dudes got upset and left. But some stayed.

And some couldn’t help but be impressed by Natasha’s social media savviness.

Here’s the story, as laid out by Twitter user @bvdhai.

A few weeks ago, he matched with a “very attractive young lady.” She had no biography listed, and he said her account was rather innocuous. They chatted for about an hour, and she slipped him her number and told him to text her.

I text her n we make small talk abt work for a bit then she goes, "actually, I have this huge presentation Im workin on for my job, would you be offended if I got back to you in like a week or two when Ive got more free time? Youre cute and I want to meet you Im just too busy rn"

Though @bvdhai thought “well, that’s an overly elaborate way to ghost someone,” he said the plan was fine and to get back in touch when she was free. Two weeks passed.

I'm like well I'll be damned. Genuinely didn't think she would message me. I reply "yeah I should be free, I'd be down" she says "amazing I'm gonna be running around today and tomorrow but just come around 6 and I'll meet you by the stage then we'll head out"

I say sure thing, looking forward to it. This morning she texts me at 9 am "hey it's gonna rain today but I think it should clear up in time for our date" I'm like cool, I'll be there

But here’s the twist. Dozens of other men probably thought the same thing at this point.

I make my way to Union Square. Eat a hot dog and look over by this open lot by 17th Ave and there is a stage and a DJ and about 100 ppl and cameras and shit and I think well this is some random ass Manhattan shit.

I stay back and assess the situation and I'm like fuck I'mma stay right where I am til she texts me. The DJ eventually stops playing and she gets on the stage and I'm so fucking confused but think well I guess she's a social media personality or some shit

And then came the big reveal.

As he wrote, “Then she says I’ve invited you all here for a chance to go on a date with me and proceeds to give a hunger games speech about what its gonna take to date her … ALL THE DUDES THERE SHE FOUND ON TINDER AND TEXTED THEM THE SAME SHIT … Every man in the crowd looks down and mimes WHAT IN THE NAME OF SCOOBY DOO THE IS THIS SHIT to themself.”

At that point I am genuinely amazed at the fallopian fortitude this girl possesses. This is top 10 greatest finesse of all time. Dudes actually stayed and played.

@bvdhai said he declined to play Natasha’s game, but others stayed.

Gothamist also published text messages from other Tinder users in which Natasha wrote similar messages that @bvdhai had received.

“The gist of it was she wanted to do Live Tinder. Folks were pretty mad,” a 28-year-old man named Nicholas who had been suckered into showing up told Gothamist. “And she started calling the different characteristics she doesn’t like. ‘You’re Puerto Rican and support Trump leave!’ ‘If you have a long beard, leave.’ Then she did a competition.”

A competition that was partially captured on video.

Unfortunately, there’s no word on how many people stayed and who eventually won the sought-after hand of Natasha. But as @bvdhai said, you have to admire and appreciate her game.

Lol notice I technically never said a bad thing about her. I have to respect that level of finesse

Update 2:12pm CT: In a video taken by the DJ that was there, Nick AM, that was discovered by NY Mag, Natasha told the men what she wanted.

She also said she didn’t want tourists or non-U.S. residents to stick around—or people named Jimmy—and she said that if any of the men’s ex-girlfriends had been the one to end their relationship, they should leave as well. “Please leave because I completely trust her judgment,” she said.