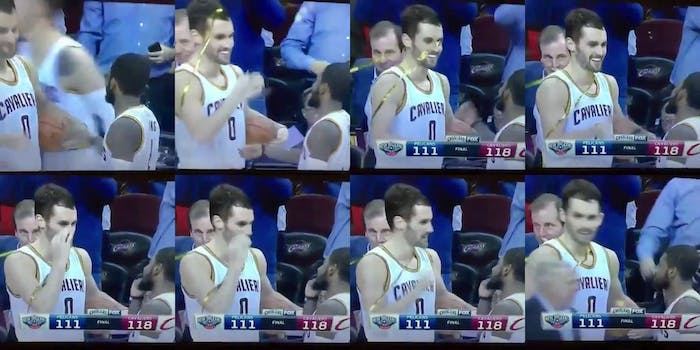 A step-by-step guide to giving daps like a Cavalier.

Playing alongside LeBron James just seems to breed fun. Following the Cavaliers’ 118-111 victory over the New Orleans Pelicans, the Quicken Loans Arena turned into a party to celebrate the team’s first home win. There were falling streamers, photobombs, piggyback rides, and super-secret handshakes.

Kevin Love and Kyrie Irving unveiled what may be the most exciting and elaborate handshake in NBA history—at least since Monta Ellis and a Warriors security guard did this. An opening-night loss to the Knicks and a week on the road gave the duo ample time to hone and perfect the handshake. Last night, they finally broke it out in front of a television audience.

If you’ve grown tired of your regular, mundane handshakes, if you’re considering greeting your friends like you too play for the Cavaliers, we broke down the steps for you. Here’s how to give daps just like a pro basketball player.

1) Begin with a normal forward-hand slap, followed quickly by a back-hand slap.

2) Next, pound down (a downward fist-bump) onto your friend’s closed fist.

3) Immediately after, let him do the same down onto your first.

5) Finish off by—this is essential to tying the whole thing together—pantomiming smoking a joint.

The finished product will have you looking like you just won a championship every time you greet.

The Cavs are only six games into their season, and they’re sitting at 3-3, but they’ve already provided the Web with tons of highlight plays and GIF-able content. Just wait until the team really starts winning.

Regardless, it’s good to see Kevin has improved his handshake skills.