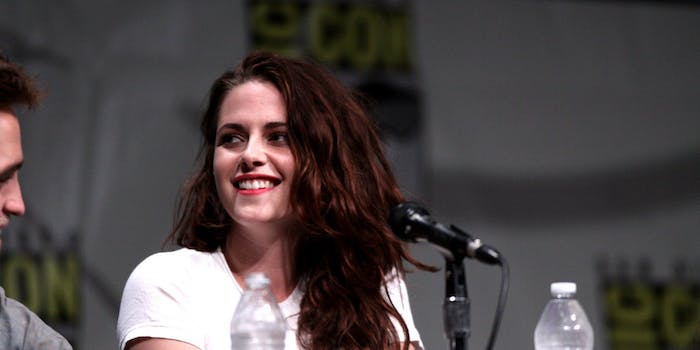 Kristen Stewart doesn’t owe anyone a ‘coming out’ speech

Kristen Stewart doesn't want to label her sexuality—and she shouldn't have to.

Kristen Stewart has issued a bold response to those intent on confirming exactly what sexual label to pin on her. In the latest issue of Nylon, in which the actress appears on the cover, she tells anyone interested in her sexuality: “Google me, I’m not hiding,”

If you feel like you really want to define yourself, and you have the ability to articulate those parameters and that in itself defines you, then do it. But I am an actress, man. I live in the fucking ambiguity of this life and I love it. I don’t feel like it would be true for me to be like, ‘I’m coming out!’ No, I do a job. Until I decide that I’m starting a foundation or that I have some perspective or opinion that other people should be receiving… I don’t. I’m just a kid making movies.

It’s a fitting statement from Kristen Stewart, not only because she’s called fame “the worst thing in the world,” but also because she’s saying, essentially, that the focus on her personal life detracts from discussion of her work—or anything else about her. It’s a reminder that Stewart doesn’t owe the Internet an official “coming out”—and to presume she does is insulting and insensitive.

Already, her sexuality has become part of the cultural conversation about Stewart—this article being no exception, I admit. Whereas Nylon simply went with “Riding Shotgun with Kristen Stewart” for a headline, countless reports about the interview have honed in on her comments about her sexuality, making it the focal point. Some, such as “Kristen Stewart plays coy over sexuality rumors,” made it seem as if she didn’t go far enough in her statement.

This is natural, I suppose, in a world where, as the Advocate explains, before a celebrity like Stewart has officially “come out, ”media outlets create “a glossary of queer innuendo that is meant to signal to a reader that a person is gay or in a same-sex relationship, without actually stating it outright.” Their hilarious list of these ways of saying-it-without-saying-it—which includes “tomboy,” “gal pal,” and “sapphic circle”—highlight the absurdity of our need to make Stewart answer the question “What are you?” not for her satisfaction, but for ours.

By phrasing her comments as she did, Stewart turns the question back on the asker, pointedly making us collectively wonder, “Why do we care so much about who she’s sleeping with? What does it change about how we perceive her whether she’s dating a man or a woman?” Those questions, whether we’re talking about a famous movie star or the rest of us, are much harder to answer than a simple word can ever summarize.

Stewart doesn’t owe any of us an official “coming out”—and to presume she does is insulting and insensitive.

In an interview with Beatrice in 1997, writer Jill Nagle said, “Sex is what academics would call oversignified. You can play tennis with a friend without worrying about ‘what it means,’ but you can’t do that with sex.” That quote has stayed with me, because even though in the intervening years, we’ve made a lot of progress in terms of being more knowledgeable and accepting of a variety of sexual orientations, sex acts, and genders, we still want a simple way of framing a topic that’s actually more complex, in many cases, than one word can summarize.

We still get so fixated on who people are screwing we practically salivate over every juicy detail—witness the media frenzy when an interview with Cate Blanchett was edited in a way that implied she’d had sexual relationships with women, followed by her clarification that she hadn’t, actually. Stewart does not want to be a poster child, and her comments, appearing two months after her mother was quoted in the UK’s Sunday Mirror confirming Stewart’s relationship with assistant Alicia Cargile, are a way of making it clear that she takes such fascination with her sexuality as intrusive.

Stewart is also making a larger point about the changing role of labels like gay, lesbian, and bisexual—namely, that for many people, they are beside the point. She went on to tell Nylon, “I think in three or four years, there are going to be a whole lot more people who don’t think it’s necessary to figure out if you’re gay or straight. It’s like, just do your thing.”

We’ve seen numerous similar sentiments in recent pop culture, from people who are proud, unashamed, and not hiding their same-sex attractions and relationships, but don’t want to be defined by them, from Miley Cyrus’ pronouncements about being gender- and sexually fluid and Raven-Symone’s rejection of the label “gay” (“I want to be labeled a human who loves humans”) to Maria Bello’s embrace of the term “whatever” to describe her sexual orientation and Ilana on Broad City’s declaration that “I have sex with people different from me.”

“Sex is what academics would call oversignified. You can play tennis with a friend without worrying about ‘what it means,’ but you can’t do that with sex.”

In their way, those rejecting sexual labels are offering up a very optimistic point of view, one that presumes that whatever your sexual orientation, you are entitled to explore it and define it for yourself, regardless of what anyone else thinks. This is, of course, true—though it’s vital to note that we haven’t yet reached the point where living either in the ambiguity Stewart praises or as an out gay, lesbian, or bisexual person means you’re free from discrimination.

Stewart’s right to find the questioning off-putting (if you don’t agree, ask yourself if you’d want your every date, kiss or act of holding hands, let alone what you do in bed, obsessively scrutinized). As Sarah Seltzer pointed out at Flavorwire, just as asking celebrities whether they’re feminists has led to an increasingly pointless PR spin cycle, so too does questioning them about their sexuality often come across futile and passé. Seltzer argues it’s in celebs’ best interest to remain as publicly ambiguous about their sexuality as possible, lest they be pigeonholed.

To some extent, I agree, but in Stewart’s case, specifically, her words don’t sound ambiguous. They sound like the opinions of someone who simply feels there are more important things in her public life than her personal relationships.

That’s not to say having out queer celebrities as role models isn’t important; rather, that those who want to take on that responsibility should be able to do so voluntarily, or else it’s pointless—a debate exemplified in the responses to Roxane Gay saying on Twitter that Stewart’s sexuality is not a big deal. Stewart clearly does not want her sex life to precede her acting in the public eye. She doesn’t want her sexuality to oversignified, or even, it seems, brought up at all.

The latter is unlikely to happen, but we can grant Stewart—and by extension, everyone else—the right to define or not define their sex lives as they see fit.

Rachel Kramer Bussel is a New York-based author, editor, blogger, and event organizer. Her work has been featured in the San Francisco Chronicle, the Village Voice, and Jezebel.