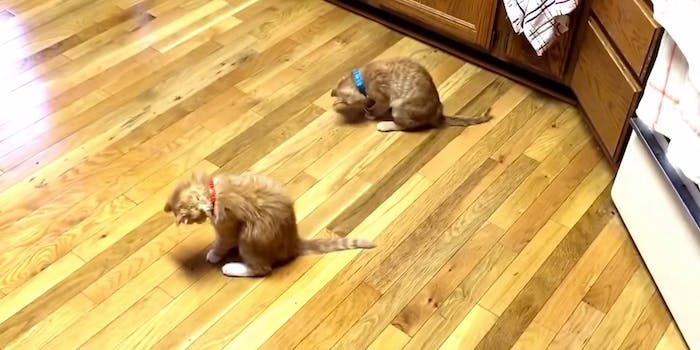 They do put in a valiant effort.

If there was a way to entertain yourself and your cats at the expense of your cats, this is probably it.

We don’t know why YouTube user bbevard put collars with bells on the household cats, but now we’re left with 40 seconds of joy and confusion as these kitties have their minds blown.

It’s like a noisy laser pointer that’s hiding in their blind spot. Where is it? Why does this noise tease them so?

After getting a few comments about how the cats were psychologically harmed by the collars, bbevard posted an update about the cats’ well being.

“No cats were harmed,” bbevard wrote in the YouTube comments. “They stopped after about an hour and a half and went back to acting normal. It was just new and strange for them. Also, the collars are breakaway collars so they can’t catch on anything anyway.”

We can only guess that the collars came off when it came for the humans to sleep too.