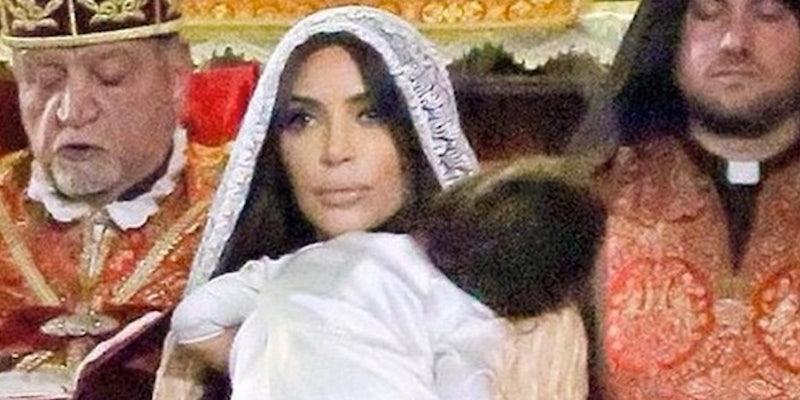 She's part of a rich tradition.

Yesterday was the second birthday of North West, daughter of the royal couple Kim Kardashian and Kanye West. Two years old already! To mark the occasion of her birth, North’s mom posted a few special Instagrams in her honor. These photos were from their family’s trip to Jerusalem back in April, where North was baptized.

The image is definitely striking. West has called his wife “the most beautiful woman of all time,” and this picture serves as a reminder that Kanye might not be wrong. The blurriness of the shot, combined with the look of her maternal hood, makes this Instagram post look like, well, a work of art that wouldn’t be out of place in the Louvre. Kim looks like a Virgin Mary IRL.

There was more than just an Instagram to be discussed here, so we asked Matthew Lincoln, a PhD Candidate at the University of Maryland, who is concentrating in 17th-century Dutch and Flemish art, to guide us through a formal analysis of the photo.

He assured us that our initial assumption—that the photo recalls the most famous mother and son in world history—was one that a lot of people would make.

“Kim’s robe and veil, not to mention the religious setting, immediately recall images of the Madonna, who is almost always depicted with a covered head,” he said. “While medieval images of the Christ child often show him as a miniature adult, depictions of this pair during the Renaissance by artists like Raphael tend to emphasize the kind of childlike behavior exhibited here by North (is that actually the kid’s name? I had to Google that—sorry, I’ve only been busy WRITING A DISSERTATION and responding to insane emails like this one).”

But because Lincoln essentially does this kind of analysis for a living, he had more of an expert opinion to offer us.

“Kim is only in white, not in the traditional Marian blue, which would obviate an identification as the Virgin,” he noted.

It seems that the key to understanding the meaning behind this photo is all in “the quality of [Kim’s] gaze.” Lincoln explained:

She neither engages directly with the viewer, nor does she look down at her child or to any other figure in the scene, as one might expect from a Renaissance or Baroque image. Rather, she is shown gazing with a detached intensity into the distance, as if looking just over the viewer’s shoulder. This conspicuous detachment, implying a spiritual reverie, immediately brings to mind the work of the Pre-Raphaelite Brotherhood, who also favored depicting women in flowing garments and long hair.

Lincoln also pointed out the relevance of Kim’s caption— a floaty angel emoji. He said there’s a through line to the work of 19th-century American painter Abbott Thayer, who along with other painters of his time, used angels as a motif and “were fascinated by the perceived exoticism of the Middle East, as seen in John Singer Sargent’s Fumée de Ambre Gris or Frederic Edwin Church’s El Khasne Petra.”

Kim Kardashian is a work of art that should be studied at every moment.