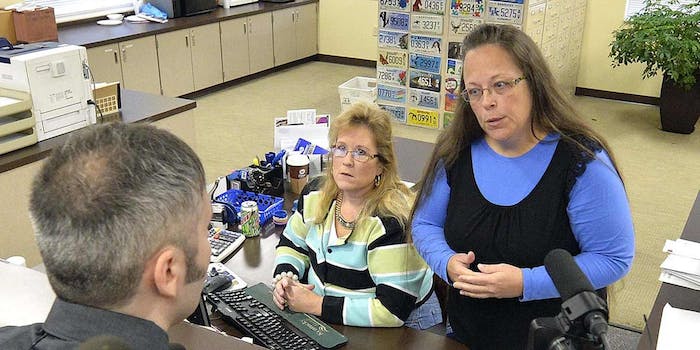 Why does the Kentucky clerk refusing to issue same-sex marriage licenses still have a job?

Kim Davis isn't standing up for her rights—she's breaking the law.

It’s clear now that Kim Davis, the Rowan County, Kentucky clerk who has refused to issue marriage licenses to anyone because of her religious opposition to marriage equality, is going to be a martyr to the cause. She and her supporters want a photo-op of her perhaps being physically removed from office so they can visually show what they claim is religious ”persecution.”

That county clerk in KY, Kim Davis who is refusing marriage licenses to gay people probably thinks she is killing it with heaven points

So if Kim Davis can sit in the county clerk's office ignoring the law without consequence, does that mean we can smoke pot there too?

And now it’s time for those of us who support justice to say: “So be it.” We cannot be held hostage to the theatrics of religious extremists, nor should we allow them to think that supposedly bad “optics” will deter us in demanding our rights.

Defying the Supreme Court, which refused to grant her a stay as she appeals a ruling ordering her to issue licenses, Davis turned away couples again today. When asked under whose authority she was doing this, she replied: “God’s authority.” Kim Davis also said she’d face the “consequences” and told a gay couple they too “will face the consequences when it comes time for judgment.”

Some are seeking to get her fined, while the district attorney’s office is looking into official misconduct charges and the ACLU filed a motion in federal court seeking to have her held in contempt of the federal judge’s original order that she grant marriage licenses.

But none of that will stop Kim Davis and her attorneys at the Liberty Counsel, the anti-gay legal group that has represented her. She’s ready to put her job and probably her body on the line, like a fellow clerk who supports her and said he’d “die” for the cause. They’d relish an image of Davis being dragged out of the office, perhaps facing a fine or time in jail—or both. They’ll use it to galvanize religious conservatives across the country (who will surely raise money for any fines she incurs), and it will give the GOP something with which to energize evangelical voters.

Kentucky Republican gubernatorial candidate Matt Bevin is already defending Davis and attacking his Democratic opponent for not doing so. GOP presidential candidates—from Mike Huckabee and Sen. Ted Cruz (R-Texas) to Jeb Bush and Gov. Scott Walker (R-Wisc.), have been supporting individuals like Davis in their fight for “religious liberty” in the wake of the Supreme Court marriage equality ruling in June.

And a bill in Congress introduced by GOP members, the First Amendment Defense Act, seeks to exempt people like Kim Davis from doing their jobs based on religious beliefs.

We cannot be held hostage to the theatrics of religious extremists, nor should we allow them to think that supposedly bad “optics” will deter us in demanding our rights.

Thus, a photo-op will indeed be used to give red meat to the enemies of equality. Nonetheless, it’s time that all Americans see the hatred front and center against LGBT people—and see what people are willing to do in the name of that hate.

A friend of mine suggested the “optics” of Davis being removed from office would be bad, and that it’s better for the gay couples to stage a sit-in and get arrested—showing they truly are the ones being persecuted here. He noted that during the lunch counter sit-ins during the civil rights movement it was those discriminated against who were arrested, an action that further showed the discrimination black Americans faced—and not the owners of the restaurants. The opposite would have brought those business owners sympathy.

We should not and cannot worry that it might create backlash with many other Americans if they see Davis, now flagrantly defying a court order, brought to justice—even if means charges are brought against her and her supporters get their photo-op. The moment we pull back, fearful of the supposed ramifications, we are giving fuel to bigots and allowing them to organize further. They’ll then have a foothold—while we show weakness.

The majority of Americans know this is discrimination and are with LGBT people. We must stand strong and demand full equality everywhere.

This article was originally featured on the Huffington Post’s Gay Voices section and reposted with permission.