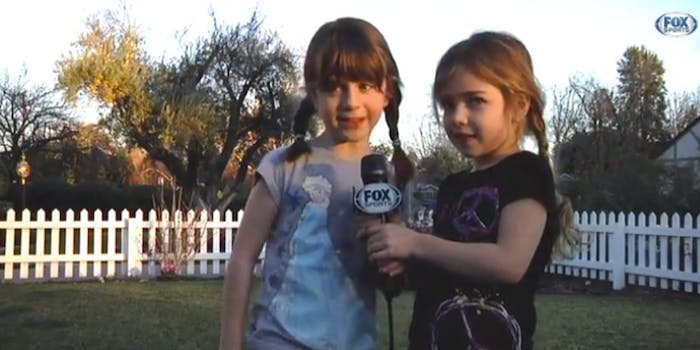 You have to wonder if any of these kids saw the interview.

Richard Sherman’s impassioned post-game interview with Erin Andrews led to some thoughtful and not-so-thoughtful discussions about race this week, and Sherman’s own post-game op-ed further explored people’s ingrained biases. Where do we go from here?

Well, Fox Sports decided to go the Jimmy Kimmel route, and have a bunch of giggly kids reenact the interview.

You have to wonder if any of these kids saw the interview, or know who Richard Sherman is, or know how many ugly, racist comments came in the wake of his interview (and in the comments of this video). Their levity certainly changes the tone of the original take.

Here’s proof of a better understanding: Last night, Sherman tweeted out this drawing from a kid who compared him to the character in the 2012 Disney film Wreck-It Ralph, “because people think they are both bad guys but they are both really good guys.”